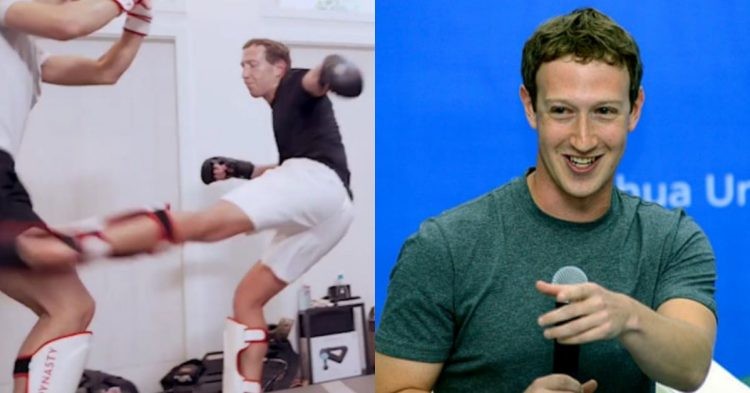 Mark Zuckerberg is one of the richest men in the world. He is famous for being the founding father of Facebook. He is known to be very athletic and always maintains himself very well. However, it seems like Mark is stepping up his workout sessions! In a recently surfaced video, the Fb founder was seen hitting the mitts and trying out his hand in MMA!

The video is certainly interesting as he does not look bad during the sparring session. From his stance to his punching technique, everything seemed decent. Mark, who does not have any previous experience in combat sports, looks like he’s getting the hang of it very well.

He was not only throwing punches, but Mark also landed some stiff kicks and engaged in some grappling sessions as well. Although the possibility of Mark actually stepping inside a cage to fight is almost zero, the footage actually helps to spread the word. One of the most famous men in the world taking MMA training is certainly a glowing advertisement for the sport.

The MMA community had a field day on Twitter once the clip became viral! Seeing Mark Zuckerberg doing some MMA training garnered a lot of reaction from the fans; surprisingly, none of them was negative. While one user joked that Mark is getting ready to fight at Dana White’s Contender Series, others called his striking better than some of the fighters in the UFC.

One user floated an interesting theory and added that Mark is training MMA to fight CM Punk in the Octagon!

We have finally found a suitable MMA opponent for CM Punk. My money’s on Mark “The Alien” Zuckerberg https://t.co/nGSOHamwEF

I think Mark Zuckerberg is ready for a shot on the Contender Series 👀 pic.twitter.com/26QMFmoLZB

Mark Zuckerberg could be getting prepped for a Career in MMA.

Just saw a video of Mark Zuckerberg training mma and he’s kinda got hands??? What the FUCK??

Paddy Pimblett defeated Rodrigo Vargas in March at the very first UFC London card of 2022. After that, he called out Mark Zuckerberg. He was extremely disappointed about Instagram banning all of his accounts and called Mark the biggest bully in the world. One user pointed out that Mark’s recent training footage was in response to Paddy’s call out.

What are your thoughts on the footage? Do you think Mark Zuckerberg looked good while throwing strikes? Let us know in the comments down below.

Shaquille O’Neal Criticizes Kevin Durant, Says His Career Outside of Golden State Warriors Has Been an ‘Abject Failure’