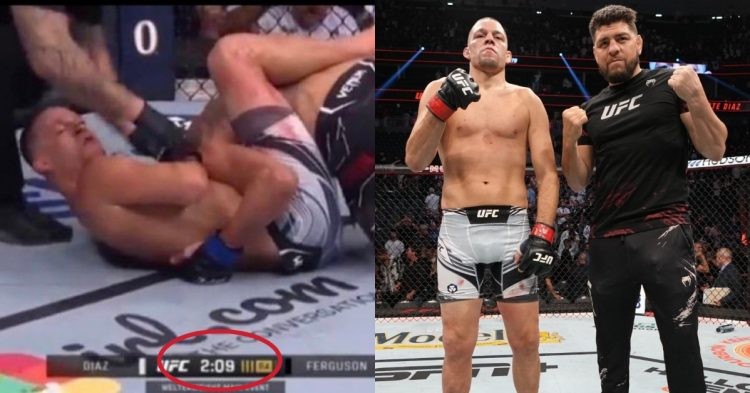 It looks like Nate Diaz is ending his 15-year career in the UFC on a major high. After a tumultuous fight week and a change in opponent at the last possible minute, the odds were stacked against him. But that did not stop the Stockton native from putting on a spectacular fight for the fans. Nate ultimately defeated Tony Ferguson with a guillotine choke in the 4th round.

Speaking of Stockton, the area code for Nate’s home town is 209. In a freaky coincidence, when the ref stopped the fight, it was the 2:09 minute of round 4. Nate and Nick Diaz always shout out Stockton whenever they are taking part in an event. So for Nate’s last UFC fight to be stopped at the 2:09 mark is very ironic. It ends an era in the UFC.

LOOK AT THE CLOCK pic.twitter.com/alOoDUBguY

Spinnin Backfist caught the detail and pointed it out on Twitter. It sent Twitter into a frenzy as fans saw the irony in the incident. While one fan called it a storybook ending, another fan said the MMA gods are real!

The MMA GOD’S are real https://t.co/Uyg1NDbSqh

The fight was a typical Nate Diaz contest. Usually, Nate starts off in a slow manner and picks up the pace in the latter rounds. So was the case against Tony Ferguson as well. The fans have previously seen leg kicks having a great effect on Nate during fights. Diaz did not pay much attention to checking the leg kicks. But this time against Tony, Nate did!

Tony started off the fights with some heavy leg kicks. But it backfired as Nate checked a kick which opened up a big wound on Tony’s leg. It visibly bothered Ferguson as it compromised his mobility to a certain extent. Although El Cucuy kept on firing the kick, the pain was visible. It prompted Tony to shoot for a takedown at the beginning of the 4th round.

Nate was anticipating it and he caught Tony in a guillotine choke. Although it seemed like Tony was about to escape, the submission hold was locked in too tight and Tony tapped out. Following the fight, Nate revealed that it was his last fight in the UFC for the time being.