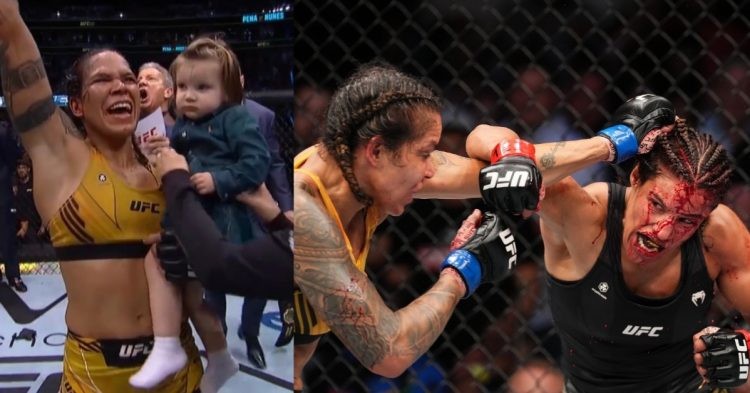 One of the most anticipated rematches in recent memory went down in the main event of UFC 277. The UFC Women’s bantamweight champ Julianna Pena put her belt on the line against the undisputed female MMA GOAT Amanda Nunes. Pena shocked the world when she beat Nunes at UFC 269.

But the majority of the fan base took the result as a fluke. Nunes had to deal with injuries and gym-related issues heading into their clash in 2021. So one could be forgiven if they cut Amanda some slack for the loss. The injuries left a big impact on Nunes’ cardio which ultimately turned out to be fatal against Julianna.

The first minute of the rematch saw both Julianna Pena and Amanda Nunes try to understand each other’s game plan. But the fight started to open up more as Pena tried to land some big punches on Nunes. But Nunes showed her experience and remained calm under the pressure. Every time Pena tried to lunge forward, Nunes fired a jab down the middle to good effect.

Amanda even dropped Julianna with a hook in the first round. But the defending champ managed to find Nunes’ chin a few times to end round 1. Amanda started round 2 with some massive kicks. In a wild moment of exchange in the opening minutes, Nunes dropped her with a massive punch. Although Pena managed to get up, Amanda dropped her once again moments after.

Much like the first fight, Pena showed her grit and managed to recover once more. Interestingly, Nunes seemed unwilling to grapple even after dropping Pena for the third time in the round. But Nunes’ striking seemed very effective. So her plan was to put Julianna away on her feet. round 2 was definitely a big one for the challenger.

With a bad previous round, the onus was on Pena to turn things around in round 3. Nunes started the round with a massive spinning elbow which would have put Julianna’s lights out if it landed. Fortunately for Pena, it landed on her body instead of her chin. Despite her unwillingness to grapple, Amanda finally secured a takedown in the third minute of round 3.

But it became very apparent why Amanda was hesitant to grapple. Pena seemed the more active fighter on the ground after the initial takedown. However, Nunes eventually found a way through Pena’s guard and landed some huge elbows that busted open Julianna’s forehead. Amanda ended round 3 on top.

Sensing Pena’s vulnerabilities, Nunes took Pena down straight away in round 4. But much like the last round, Julianna was extremely active from her guard. She even managed to lock in an armbar which put Nunes in a very bad position. But Amanda escaped the submission attempt and landed a few nasty elbows. In an exchange at the end of the round, it did look like Pena stunned Nunes briefly before being taken down.

Although she had her moments in the fight, Pena definitely needed to find a finish in the fifth round. Nunes did not waste any time in securing a takedown. But much like the previous rounds, Pena was the more offensively active fighter on the ground. There were multiple submission attempts from Pena.

But it was Nunes who ended the bout with a few submission attempts of her own. There were many moments where Pena had success in the fight. However, Nunes did not allow Pena to gain any kind of momentum and dominated the fight through and through. So it was not surprising to see her win the fight via unanimous decision. The judges scored the fight 50-45, 50-44 and 50-43 in favour of Amanda Nunes.