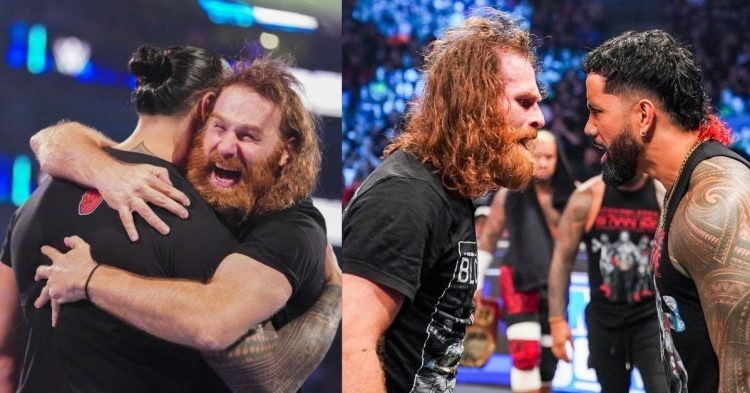 Sami Zayn, a former Intercontinental Champion, has been working with WWE for well over 8 years and has participated in a number of significant events in the history of the company. He is perhaps the most beloved performer on WWE TV at the moment.

Tonight we celebrate the greatest faction in WWE history. Also… DX will be in the building.

For the past few months, Sami Zayn has been persistently attempting to join Roman Reigns and The Bloodline. When Jey Uso tore off his shirt a few weeks ago, Roman Reigns revealed that it was all a ploy and welcomed the former Intercontinental Champion as an Honorary Uce.

Although it is anticipated that Zayn would eventually be banished from the faction in order to start a feud with The Usos for the Undisputed WWE Tag Team Championships, Kevin Owens may also join in.

Sami responded on Twitter to a comment by Roman Reigns from August 2021 in which he discussed which WWE superstars he would like to wrestle against. Zayn has denied this rumor.

Sami was mentioned by Roman, who asserted that “anything that gets more Sami Zayn on TV is a good thing.” Sami responded to people who think the Bloodline will banish him. “Every single week people say The Bloodline is about to kick me out, I don’t belong, that I’m just kissing up them, etc. But I think some people are *finally* starting to see that there is actually mutual respect here. Listen to The Tribal Chief himself from over a year ago.”

Every single week people say The Bloodline is about to kick me out, I don’t belong, that I’m just kissing up them, etc.
But I think some people are *finally* starting to see that there is actually a mutual respect here. Listen to The Tribal Chief himself from over a year ago. https://t.co/LHImtVgqTC

Sami is one of the best performers in the world right now and everyone should acknowledge it, pun intended. Sami has it all charisma, amazing ringwork, and best of all mic skills.

Since the departure of Vince McMahon WWE universe has noticed the promos getting better and sounding less scripted thanks to Papa H. Sami has worked extremely well in recent days. His mic work is exceptional, and his making the whole bloodline break the character proves his worth.

On the latest edition of the Friday night Smackdown, Logan and Roman along with The Bloodline faced off in the ring. Sami then took the mic and the reactions by the crowd and even the superstars in the ring simply explained why Sami is the best thing in the WWE right now.