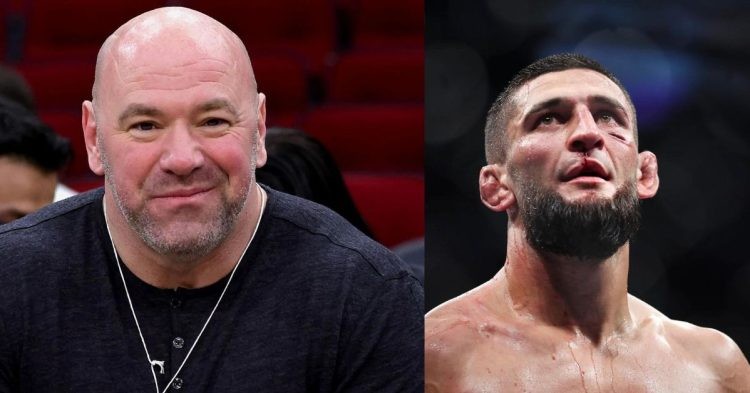 After a highly impressive 52-second stoppage against Donovan Beard, Bo Nickal earned his second victory in DWCS. After a performance like that, Nickal getting a UFC contract was almost inevitable and he indeed got that becoming the latest addition to UFC’s Middleweight division.

After the fight, Bo Nickal didn’t shy away from calling out a fighter many are afraid to call out. Talking to Brett Okamoto post-fight, Nickal said “If the UFC wishes, give me that Swedish dude, He might not even be the best guy, because he can’t even make weight, but if that’s the case, I’ll take him. “If not, then give me Logan Paul. UFC debut. Me vs. Logan Paul, I know he has some skills. If we can’t do it in the UFC, let’s do it in the WWE. I’ll meet you in the ring.”

Nickal is a former freestyle and graduated folk-style wrestler and is a three-time NCAA wrestling champ at Penn State. Khamzat Chimaev on the other hand is considered to be one of the best wrestlers in the UFC. In his last fight against Kevin Holland, Chimaev completely outwrestled him and earned an easy victory against a hot prospect in Kevin Holland. Following Chimaev’s decision to move up to 185-pounds a fight between Nickal and Chimaev does make sense stylistically, but the UFC President Dana White doesn’t seem to be interested.

Addressing the media after the event, White when asked about the possible match-up said “Let’s not get Crazy now”

Dana White rejecting Nickal to fight Chimaev didn’t sit down well with most of the fans. with most of them accusing White of protecting Chimaev of a possible threat in Bo Nickal. You can find some of them below.

“Dana is protecting the investment.”

“He’s as ready as Khamzat is, Bo would beat Khamzat, his history in fighting is way deeper than Khamzat’s.”

“Translation- “if either one looses, their hype train is gone and Dana makes less money”

“3X NCAA National Champion. I believe he can handle himself very well against Khamzat”

“Dana is hyping his son too much, Khamzat is a great fighter without a doubt bur we all have seen what burns did to him”

“Khamzat  did not even make weight. What does that say for his work ethic?”

“C’mon uncle Dana. Khamzat was the same in the beginning. Let them fight”

It seems like we might not see Chimaev face Nickal anytime soon. But If Bo Nickal’s continues such form inside the cage and Chimaev fights at middleweight more often, we certainly have a very exciting future match-up in the making.