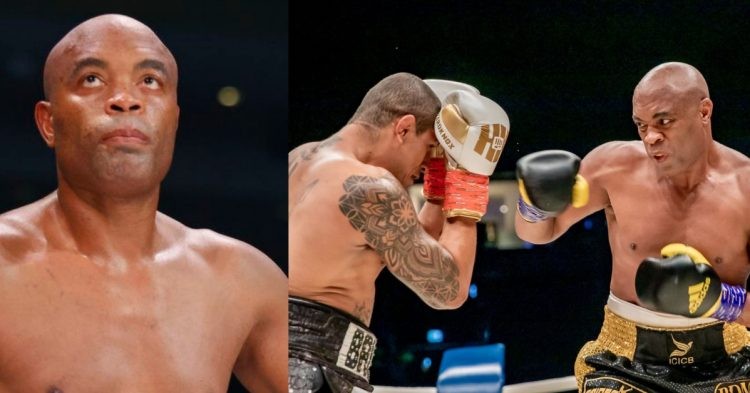 MMA GOAT debate always revolves around Jon Jones, Georges St-Pierre and Khabib Nurmagomedov. But there is a big section of the fanbase who think it should be Anderson Silva. Anderson held the UFC middleweight from 2006 to 2013. During his 7-year reign as the champ, Silva beat the likes of Vitor Belfort, Chael Sonnen, Demain Maia and Dan Henderson.

But not only middleweight, The Spider occasionally tried out his hands at light heavyweight as well. But his legendary win streak came to an end after his shocking loss to Chris Weidman at UFC 162. It marked the beginning of a 9-fight run, where Silva only won 1 fight and lost 7. It eventually led to his release from the UFC in 2020

The legendary Mixed Martial Artist then resumed his boxing career in 2021. So what is his boxing record and how many knockout wins does he have? Let’s find out.

Anderson Silva has a professional boxing record of 3-1

Anderson Silva had his first professional MMA fight in 1997. But he switched his attention to boxing in 1998. He made his first appearance in a boxing ring on May 22nd, 1998. Silva’s first opponent was Osmar Luiz Teixeira. Silva lost the fight via RTD in the first round itself. Following that, he took a 7-year break from the sport until 2005.

On May 5th 2005, Silva fought Julio Cesar De Jesus in a 6-round fight. However, the bout did not go the full distance as Silva knocked out De Jesus at the 0:19 minute mark of the 2nd round. That was his last boxing match for 16 years, as he was busy creating history inside the Octagon. But he made a triumphant return to the boxing ring against a Mexican superstar.

Following his UFC release, Silva fought Julio Cesar Chavez Jr on June 19th 2021. It was a terrific display of Silva’s fluent boxing skills and he defeated the former boxing champ via split decision. Although Chavez Jr is not the most skilled fighter, it was still a big achievement for the former UFC champ. In his last pro boxing bout, Silva defeated Tito Ortiz in round 1, on September 11th of the same year.

Anderson Silva’s last fight was against Bruno Machado on May 21st, 2022. However, it was an exhibition fight and it took place in the undercard of Floyd Mayweather‘s exhibition match against Don Moore. Ahead of his much-anticipated clash against Jake Paul, Silva has a professional boxing record of 3-1, and 2 out of his 3 wins came via KO.