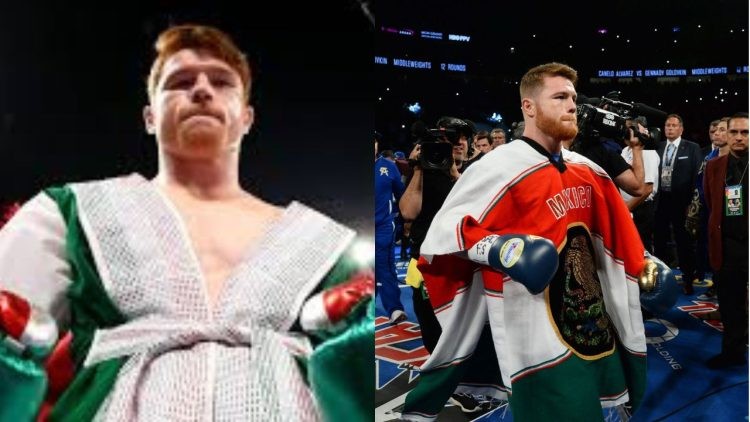 Canelo Alvarez faces off against Gennadiy Golovkin on the 17th of September 2022. As such, Canelo will be looking to cap off an incredible trilogy at the T-Mobile Arena in Las Vegas, Nevada. Ahead of the fight let’s have a look at Canelo’s walkout songs which he used in his past few matches.

In one of his most memorable and iconic fights, Canelo walked out to this absolute belter. The song’s patriotic theme rallied the crowd for his second fight against Gennadiy Golovkin. On the night, Canelo was successful as he went on to beat Golovkin by way of a majority decision.

For his walkout songs, Canelo tends to follow a patriotic, mariachi theme in his song selections. The same can be said for his fight against Billy Joe Saunders in 2021.

Filled with passion and heart, the crowd joined along in welcoming their hero to the ring and cheering him on. Canelo would go on to win the fight via 8th round corner retirement after Saunders suffered a fractured orbital.

For his bout against Callum Smith in 2020, Alvarez continued the longstanding tradition of a Mexican song. On this occasion, he chose the peppy tune of “El Palenque” by Vicente Fernandez. The intro of the song features an iconic trumpet solo that resonates with every Mexican around the globe.

On the night, Canelo comfortably controlled the fight over 12 rounds before claiming the victory by unanimous decision.

For his title defense against Avni Yıldırım, Canelo decided to try something different. Instead of his signature patriotic tune, Canelo gave his buddy J Balvin a call. The Colombian megastar put on a show for the ages before welcoming Canelo to the ring with a live rendition of his mega hit-Mi Gente

Fans say that Balvin’s performance was better than what was seen from Yıldırım on the night. The Turkish fighter was absolutely outclassed by Canelo, resulting in his corner throwing in the towel at the end of the third round.

In one of his most iconic entrances, Canelo was serenaded by an entire arena. As such, Alvarez took the opportunity to shed light on one of the best-selling Latin pop/rock groups of all time, Maná, and mariachi music in general. The lead singer of the group Fher Olvera sang El Rey, an iconic mariachi song as he walked out alongside Alvarez for his bout against Caleb Plant in 2021.

Canelo rounded off yet another historic performance with an 11th-round TKO of Plant to seal the deal. Moreover, Alvarez’s victory meant he became only the sixth fighter to unify all belts in one division in the four-belt era.

Canelo takes on Gennadiy Golovkin in a trilogy bout next and there is no doubt that he will pull out yet another stunning entrance for this fight.

What are your favorite walkouts of Canelo Alvarez from his boxing career?