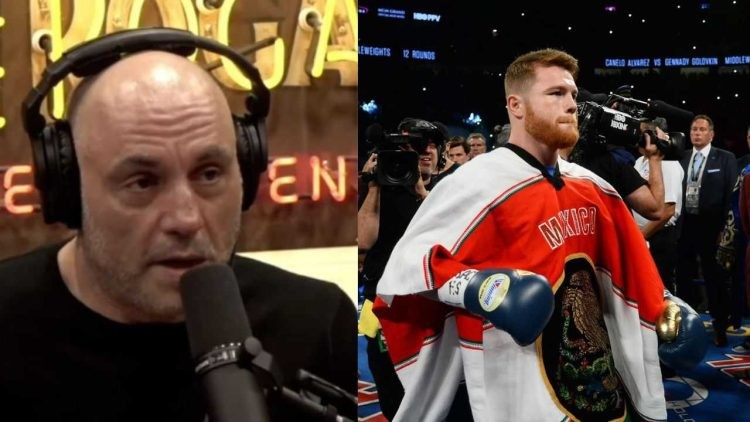 The world as we know it was not the same after Canelo Alvarez lost to Dmitry Bivol. The Mexican’s second-ever defeat and the fallout from the result have led to many headlines around the world. As such, Canelo’s failure to capture the WBA (super) light heavyweight title remains a topic of discussion.

There have since been many theories as to why Canelo lost to Bivol. The most obvious was that Alvarez felt too heavy and slow, whilst others say that maybe he was overconfident.

FIRST FACE OFF OF FIGHT WEEK 🍿

Many commentators and pundits have also discussed various reasons why Canelo lost the fight.  Interestingly Joe Rogan believes that his vegan diet is to blame. The UFC commentator and podcaster is known for his disapproval of veganism and is a supporter of a meat-based diet.

Thus, Rogan shared an Instagram story criticizing the boxer for choosing a vegan diet leading up to the big fight which he ended up losing. “That worked good,” Rogan commented, having shared a quote from Canelo about his diet. It appears that Rogan believes Canelo’s vegan diet was to be blamed for the loss to Bivol.

“I eat bread only once a week,” said Canelo Álvarez in an interview, “or maybe a serving of rice. But no more than once a week.” As for his meals, Canelo mostly relies on a protein shake for his nutritional needs.

Between his meals, Álvarez likes to snack on things like cucumber and jicama, fruits and vegetables that deliver water and fiber without much of a calorie bump that helps to fluff off hunger. But like his former opponent Amir Khan, Álvarez won’t go well-fed into a fight. “Feeling full can be a disadvantage,” he says. “You can have the best training but just feeling full can make you sluggish and cause you to lose.”

But as soon as the fight’s over it’s party time. “I do two months of strict dieting,” he says, “so after fight night, I go for whatever my body is craving. It’s usually sushi. But after that, I go home to Guadalajara and indulge in a lot of tacos before I have to start getting in shape for another fight.”

Most importantly, let’s hope that Canelo’s diet is in order for his trilogy fight against Gennadiy Golovkin on 17 September 2022 at the T-Mobile Arena in Las Vegas, Nevada.