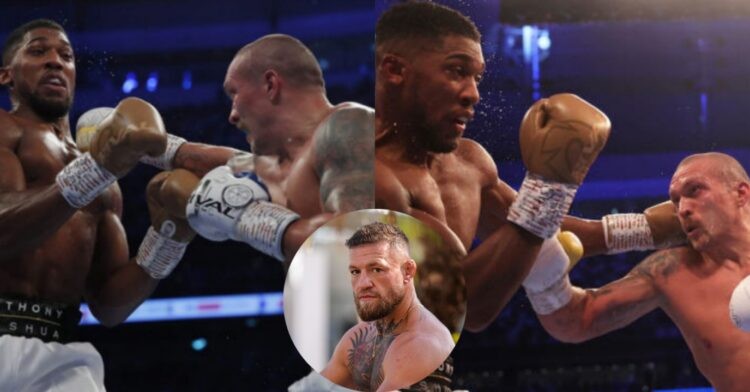 Conor McGregor reveals who he is rooting for in Oleksandr Usyk vs Anthony Joshua 2! Usyk and Joshua previously clashed on September 25th of 2021. Joshua was thoroughly outboxed by the Ukrainian for the majority of the bout. The judges scored the fight 117-112, 116-112 and 115-113 to give Usyk the nod via unanimous decision.

Joshua was clearly the bigger fighter with better credentials. But Usyk had a master plan which he executed to perfection. The fans in the UK were terribly disappointed with the result it is AJ’s second loss in only 4 fights.

With the rematch rumoured to be in the works, Anthony Joshua will have a chance to redeem himself once more. He had a lot of trouble putting up any kind of meaningful offence against Usyk in the first fight. The UFC fighter commented on that.

However, it does not seem like Conor McGregor has a horse in the race. Instead of choosing a side, Conor is hoping for a great fight.

“It didn’t go so well [for AJ] the last time. It’s a tough ask. AJ is a good guy and wish him well. Usyk is a great guy as well and hope for a good bout for both men.”

The Notorious is a big fan of boxing. Despite being one of the most successful MMA fighters of all time, McGregor crossed over to boxing. Not only did he do well against perhaps the greatest boxer of all time, Floyd Mayweather, but the fight also sold a reported 4.3 million PPVs.

Although he lost Floyd, there were a lot of talks of Conor McGregor possibly fighting Manny Pacquiao in the summer of 2021. But those plans ultimately did not summarize as McGregor lost to Dustin Poirier at UFC 257 in January.

An immediate rematch was set up for UFC 264 in the summer of last year. But it went horribly for him as Conor broke his ankle during the bout. As a result, he has been missing from action for almost a year.

When will Conor McGregor fight next?

As reported earlier, Conor McGregor is likely to fight at the end of the year. By then, it is fully expected that his ankle will be back to 100%. He certainly does not seem to be in a rush to come back and re-injure his leg. With elite fighters lining up to fight him, Conor can certainly pick and choose who he wants to fight.

Conor was recently spotted in Monaco to attend the 2022 Grand Prix. He seems to be really enjoying his time there. McGregor certainly needs the break as he prepares for his return to the Octagon later this year, With him losing of his last 7 fights, there are a lot of questions him whether Conor can re-discover his old self and get back to winning ways.

The 33-year-old may very well get a title shot in his return fight. The title is currently vacant as a result of Charles Oliveira’s missing weight against Justin Gaethje at UFC 274. Hence, a bout between Conor and Charles will be a massive fight to make if McGregor recovers from the injury in time.