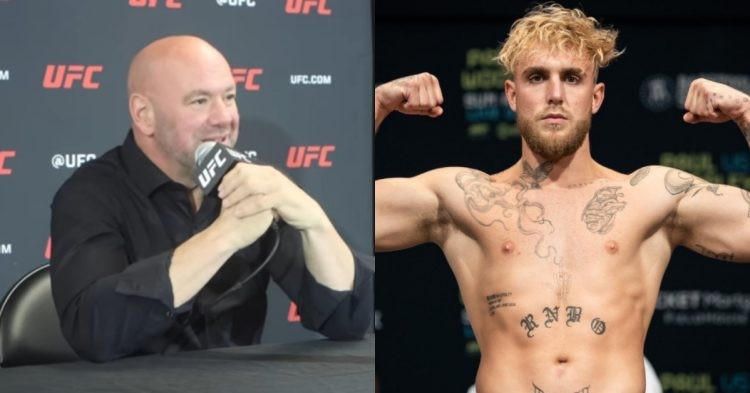 UFC President Dana White does not really have anything nice to say about Jake Paul ahead of his boxing return. The Problem Child will make his come back to the ring on August 6th against Hasim Rahman Jr inside the Madison Square Garden. But Dana does not think that the YouTuber turned boxer is a big draw.

Recently, former UFC double champ Conor McGregor called Jake Paul a flop. He reminded the fans of Paul’s last outing which reportedly only sold around 65,000 PPVs. In response, Paul took a lot of shots at Dana and Conor. He even alleged that White and The Notorious One were sharing a ‘hooker.’ Paul also revealed how many PPVs he sold throughout his 5-fight career.

However, Jake’s figures did not impress Dana White. The 52-year-old previously stated that Paul was not telling the truth about his PPV numbers. It does not seem like he has really changed his stance on the matter. During a recent press conference, Dana echoed Conor McGregor‘s statement about Paul being a flop.

“I mean is this still something? Is this still a thing… it isn’t to me. I could care less. He’s a pay per view turd.”

Is Dana White right about Jake Paul being a PPV flop?

As mentioned above, Jake Paul’s last outing was a disaster for him in terms of business. Only selling 65,000 PPVs certainly was a big blow for his brand. Jake’s whole gimmick is based around him being the biggest combat sports star. So, his last fight was a big setback for Jake.

The upcoming bout against Hasim Rahman Jr is not the most anticipated amongst the fans. Originally, Paul was scheduled to go head to head against Tommy Fury. But the bout got cancelled for the second time. Their first contest was cancelled as a result of Fury being injured. But this time around, it was due to some legal issues that have barred Tommy from entering the USA.

Will the 25-year-old be able to work his magic and sell the PPVs? By the looks of it, it does not seem like the bout is ready to set the box office on fire. It may do good enough for Jake to continue his career, but it will not match the figures that Jake had in the first few fights of his career.

Jake Paul has managed to sell over 2 million PPVs in his 3 headlining fights. But his numbers have declined massively from the first one to the last. While he sold 1.5 million PPVs against Ben Askren, Paul has only managed to sell 500,000 and 65,000 respectively for his fights against Tyron Woodley. Hence, Dana White’s comments on Paul being a ‘PPV turd’ can’t be ignored entirely.