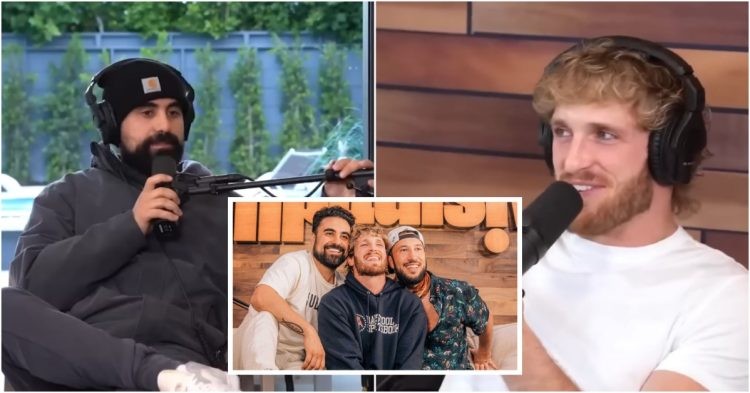 Logan Paul has created one of the biggest podcasts in the world. Although it does not do the same numbers that “The Joe Rogan Experience” does, “IMPAULSIVE” is an extremely popular podcast itself. The programming features three people on a regular basis, Paul, Mike Majlak, and George Janko. But, it nearly came down to two men as Logan almost fired Janko!

George, Mike, and Paul are best friends. But even amongst friends, there are times of friction. So was the case in December 2021. Logan Paul shocked the fans as he revealed let them know that he fired George Janko. At the crux of the incident, was a podcast with the Island Boys.

Island Boys are a group of two young rappers. They came on Paul’s podcast on 15th December 2021. But the podcast went off the rails pretty soon as the Island Boys walked out of the programming. George was pretty dismissive of the group and they felt disrespected.

Janko missed the next episodes of the podcast and the budding boxer revealed that he was fired! As per Logan Paul and Mike Majlak, George Janko “disrespected” the guest and it was not something that they were willing to tolerate.

At the time Jake Paul was the guest and he did not quite buy it. He sensed that Logan and Mike were joking. They later revealed that Janko was missing from the podcast due to COVID-19.

Logan Paul and George Janko are really close. They have been business partners for a number of years now. However, they have had clashes over the years. George Janko once walked out of the podcast as he did not want to be made fun of by comedian Bobby Lee. But, perhaps one topic which has been an issue of debate between them, is religion.

The Maverick is admittedly an agnostic. During an episode of IMPAULSIVE, he revealed what he believes in. Although he acknowledges a higher power, he refuses to put his faith in a religion. But, Janko on the other hand, is a devoted Christian. Hence, he took issue with Logan’s constant dismissive attitude toward religious faiths.

“Genuinely, I know people that hate me, treat me better about my faith than you and you’re my best friend. So like, I get you’re wrestling with it and you like to tackle things head-on. And, I’ve told you before, if you wanna talk about it, then talk about it peacefully or we don’t have to talk about it.” (h/t via Boredumb)

Although they have butted heads back and forth about the situation, it never went out of hand. While Logan is stern about his beliefs, George Janko is at peace with his spirituality. There are certain disagreements between them. But, it never went to such an extent that Paul had to fire Janko.