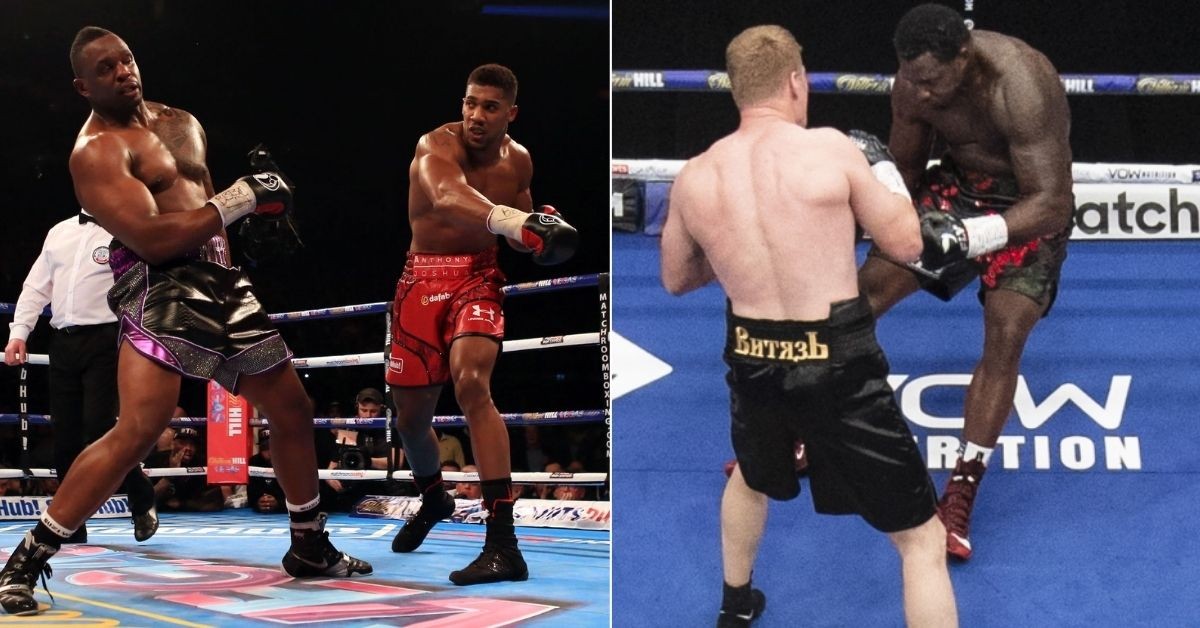 Dillian Whyte getting knocked out inside the ring

Dillian Whyte (28-2) has long been regarded as one of the greatest heavyweight boxers of the modern era. The current WBC interim heavyweight champion of the world is all set to take on Tyson Fury in an attempt to become the WBC and The Lineal Ring Heavyweight Champion of the world. Ahead of the hugely anticipated bout, let’s take a look at Whyte’s professional boxing record, and look at the couple of losses that he has suffered in his illustrious boxing career.

Dillian Whyte shared the boxing ring with his old rival Anthony Joshua for the British Heavyweight title on December 12 at The O2 Arena in London back in 2015. Having beaten Joshua in the amateur circuit, everybody hoped for Whyte to emerge victoriously. However, that wasn’t the case as Whyte suffered the first loss of his professional boxing career against AJ. Additionally, failing to get his hands on the British Heavyweight title.

A much more evolved and powerful Anthony Joshua showed a great display of his power, hurting Whyte in the very first round. However, a defiant Whyte turned things around in the second round, after catching Joshua with a vicious counter-punch, leaving the fellow British boxer visibly shaken. Whyte would go on to seemingly dominate Joshua for the better part of the next two-three rounds. Be that as it may, Joshua was able to keep himself composed, and showed at a very early age, just why he would go on to become a future champion.

Joshua landed several significant punches on Whyte, and a brutal right hand to the temple that rocked Whyte in the seventh round. It was only a matter of time before an uppercut from AJ knocked Dillian Whyte out. In the process, Whyte not only suffered his first KO loss, but also the first loss of his professional boxing career in his 17th professional bout.

Tired of waiting around for his WBC title opportunity, Dillian Whyte decided to take on the Russian boxing veteran Alexander Povetkin to defend his interim WBC strap. However, what followed shocked boxing fans around the world. Povetkin knocked out Whyte in the fifth round and it was yet again a vicious uppercut that proved to be the weapon to put down Whyte.

However, Dillian Whyte would go to exact his revenge with a fourth-round TKO win over Povetkin, in a dominant outing in the rematch. It goes without saying, the loss will forever be etched in the record books. Moreover, Povetkin will fancy his name as one of the very few to beat Dillian Whyte inside the ring.

.@DillianWhyte is getting knocked out man!

Camp is going tremendous and cannot wait from my homecoming at the big smoke ????????

All of my loyal fans are in for a treat, I’m going to put on a monster show @wembleystadium #FuryWhyte pic.twitter.com/I4CgIQYw7p

Do you think Tyson Fury can hand Dillian WHyte the third loss of his professional boxing career?