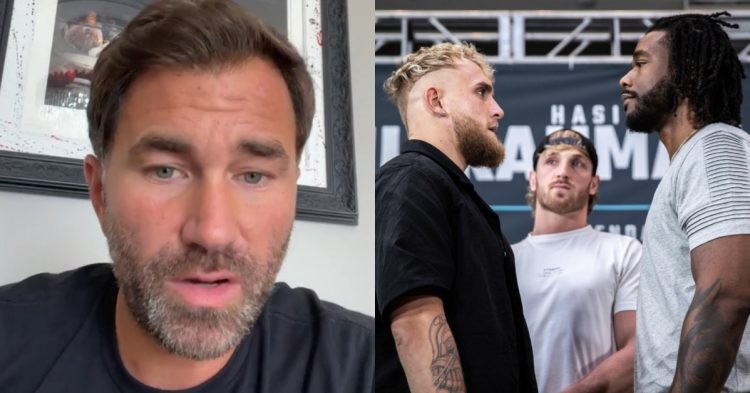 As boxing fans may know, Jake Paul vs Hasim Rahman Jr was recently cancelled. They were supposed to fight inside the Madison Square Garden (MSG) arena on August 6th. But the bout was cancelled after Rahman Jr allegedly violated terms built into the contract of the fight. However, British boxing promoter Eddie Hearn thinks there may be other reasons for the cancellation.

After the conclusion of UFC’s most recent PPV, company President Dana White weighed in on the cancellation of the fight. He did not hold back and speculated that the event sold very few tickets. Hence the organisers decided to pull the plug on the event as it was not financially viable anymore. It seems like White’s friend and popular boxing promoter Eddie Hearn agrees with the assessment.

Recently, Eddie held a live Q&A on his Instagram account. During his interaction, Hearn was asked about his thoughts on Paul’s cancelled fight against Rahman Jr. Although he initially tried to avoid the topic, Hearn was then asked about the lack of ticket sales for the contest.

“Well, you wouldn’t know about the PPV buys. But tickets weren’t going great to be fair.”

Eddie Hearn and The Problem Child have been business associates in the past. Together, they put on the biggest women’s boxing match of all time between Katie Taylor and Amanda Serrano. Ironically, that event also took place inside MSG and was a sell-out.

Why was Jake Paul vs Hasim Rahman Jr cancelled?

As mentioned previously, Paul’s camp cancelled the bout against Hasim for weight-related issues. Jake’s promotional company ‘Most Valuable Promotions’ issued a press briefing regarding the cancellation. According to the statement, Rahman Jr violated many terms of the contract.

In the statement, MVP confirmed that Hasim signed the contract for the fight on July 5th. At the time of signing the contract, Hasim weighed in at about 216lbs. He agreed to the condition of not losing 10% of the required weight in the 4 weeks leading up to the event. Apparently, Hasim’s camp reassured that their fighter will weigh in at 200lbs on August 5th.

#PaulRahman has been cancelled. Refunds for all ticket and PPV purchases will be provided. Full statement below. pic.twitter.com/thnjyjUEMT

However, after submitting his weekly weight check to the New York Athletic Commission, it was clear that Hasim has lost less than a pound ahead of the weigh-ins. So NYAC stated that the bout could not take place under the limit of 205lbs. Although Jake was ready to fight at 205lbs, Rahman made his intention clear that he will not make the walk to the ring unless the weight limit was moved to 215lbs.

But MVP decided to cancel the event as they thought Hasim’s actions were ‘deceiving and calculated.’ They also assured the fans that prices for all the tickets and PPVs will be refunded to the fans who bought them.