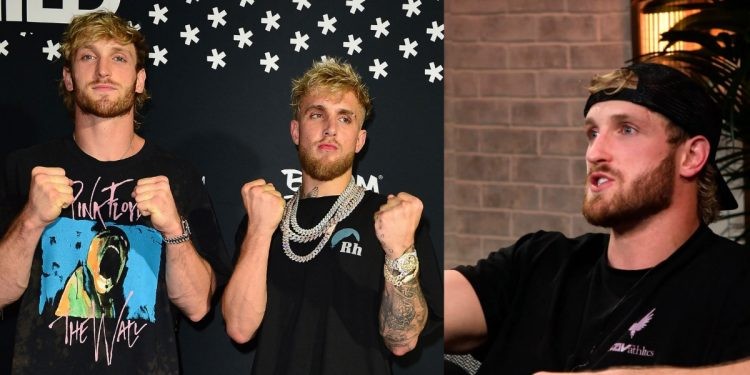 Logan Paul reveals how he squashed his beef with Jake Paul. (Images via Twitter and FLAGRANT YouTube Channel)

Logan Paul and Jake Paul have invaded the world of combat sports in a big way. Both brothers are YouTubers turned boxers. Although Logan has taken a step back from fighting, Jake is rampant and maintains a presence in the sport of boxing on a regular basis.

Although the fans have not seen him in the ring for a while, he was the co-promoter of the ‘biggest women’s boxing fight ever’ between Katie Taylor and Amanda Serrano.

Logan can always be seen in the background during Jake’s fight weeks. The elder brother always sits at the ringside for Jake’s fights and cheers him on. The younger sibling was also seen at Logan’s fight with Floyd Mayweather in June of 2021. But things were not always good between the 2 brothers.

Their beef started in 2017 when Logan and Jake were at odds initially because of the former’s comments on Jake’s music video, ‘It’s Everday Bro.’ Multiple diss tracks on each other later, they were able to forget their differences and made up.

But things once again became heated when Logan said that he beat Jake up while they were growing up. In response to that, Jake called Logan the ‘highest-paid loser in boxing.’

But now it seems as if they no longer have any hard feelings towards each other. In a recent episode of his podcast, Logan Paul revealed how they managed to put aside their differences. He said,

“There wasn’t a moment (when we ended our beef). Enough things happened, sh*tty in each other’s lives and we’d always have each other’s backs no matter what happened then, and that happened enough times for us to realize that our bond as brothers is the most important thing in the world. There’s nothing I love more in this world than Jake.”

The 27-year-old added that the hard times brought made him to realize the love that he had for his brother. Logan cited that the lack of empathy in his early days led him to have a feud with Jake. However, as he has matured, Logan has learned family values. He even went on to call Jake his best friend.

There were rumours floating during their beef that Logan Paul and Jake are heading towards a possible collision. However, a long time has passed since then. While Jake has become a somewhat successful fighter and a celebrity boxing promoter, Logan has focused on his business adventures and podcast.

But the brothers were seen discussing the possibility of them fighting in a boxing ring. Jake stated that he will definitely fight Logan. Mostly because he thinks that the bout will be unlike anything that the sport has ever witnessed. Logan also seemed to be into the idea.

But since then, Logan has appeared in the wrestling ring at WrestleMania 38. His recent comments regarding his relationship with Jake also indicate that the much-anticipated about between the brothers is not a possibility, at least for the time being. But in the show-business, nothing is impossible. They already had multiple quarrels over the years.

This time around, if a situation develops where they do not see eye to eye, they will know where to settle their differences.