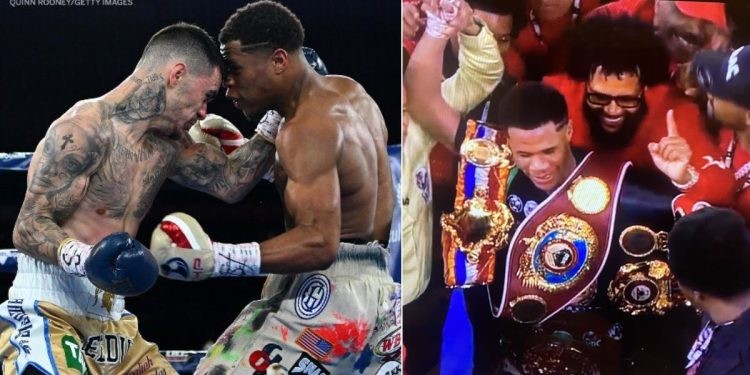 The long wait finally came to an end as George Kambosos Jr. and Devin Haney came face to face inside the squared circle for the undisputed lightweight championship in Melbourne, Australia.

Kambosos’ WBA, IBF, and WBO, along with the WBC franchise belts were on the line against Devin Haney’s WBC championship title to determine boxing’s first undisputed lightweight champion in the four-belt era.

George Kambosos Jr. vs Devin Haney round by round

Heading into the first round, Haney decided to lead the charge, making good use of his stiff jab to keep Kambosos at bay. Haney, just like we have seen in the past was quick on his feet, used feints, and kept Kambosos guessing while collecting points in the eye of the judges’ scorecard.

Kambosos was patient but looked clueless in front of Haney’s defense. Be that as it may, Kambosos fired a nice shot to the inside, getting a reaction from his home crowd. Haney had 8 punches connected over Kambosos’ 5.

Going into the second round of the undisputed lightweight championship, once again Haney’s stiff jab was on display. However, Kambosos looked much more confident.

Kambosos started the third round aggressively. The speed and footwork from the Australian were once again on display, as Haney had the first real test from the unified champion in the third round. After the stretch, it was Kambosos who had the upper hand in punches landed. There was more aggression shown from the Australian fighter, having absorbed nothing significant from Haney.

Haney continued to make great use of the jab, managing distance and keeping Kambosos away from making any kind of damage. He connected a brutal uppercut in the fifth round and paid the price for lunging onto the very defensive Devin Haney. A lot of things looked evident from Kambosos, who was looking to shut the lights out of Haney. The Australian boxer connected a good combination in the closing minutes of the fifth round.

The swelling and redness on Kambosos’ face certainly had a story to tell in terms of Haney’s success with the jab. With not a lot of power punches thrown by the first half of the fight, Haney looked to be comfortably winning on the judges’ scorecard. While Kambosos connected a solid right hand in the closing moments of the sixth.

Kambosos unleashed an offensive surge once again in the seventh round. Haney’s jab proved to be the weapon once again which not only haltedKambosos’ rhythm, and but also managed to cause significant damage to the Australian boxer.

Haney connected a vicious one-two combination in the eighth round, almost sending Kambosos on the canvas. The swelling on Kambosos’ right eye looked to trouble the unified champion who looked desperate to land big shots. He also failed to close the distance, looking clueless against an ever-defensive Devin Haney.

While a much more aggressive round from Kambosos, Devin Haney looked to have the upper hand in the championship rounds, connecting several significant strikes on the unified champion. There was a good left upper hand thrown, but Haney had great success with the jab as well.

Going into the twelfth and final round, the boos from the Melbourne crowd became louder as Haney looked to cruise to a victory in a rather comfortable manner.

Last round Haney did like NFL teams with lead, he went into prevent defense which gave Kambosos the round. But not the fight. #KambososHaney #boxing

The difference in the technique and approach was evident as Hanry not only outsmarted but outplayed the unified champion. Kambosos failed to land anything significant in the twelfth round as well and was once again made to eat to stiff jabs from Haney. As the final bell rang, it was evident Haney had done enough to become the first undisputed lightweight champion in the modern four-belt era.

‼️👑 Devin Haney dominates George Kambosos Jr with a beautiful boxing display to become undisputed WBA, WBC, IBF & WBO lightweight world champion. Travels to Australia, wins by unanimous decision in front of 40,000 of his opponent’s fans and takes the belts back to America.

After everything was said and done, it was Devin Haney who emerged victorious with a unanimous decision (116-112 x 2, 118-110) victory to become the undisputed lightweight champion of the world. With the victory, he extended his undefeated streak to 28-0. Moreover, he became the second-youngest undisputed champion in the four-belt era. Meanwhile, Kambosos Jr. succumbed to the first loss of his professional boxing career.

George Kambosos Jr. Confirms He Will Exercise His Rematch Clause Against Devin Haney