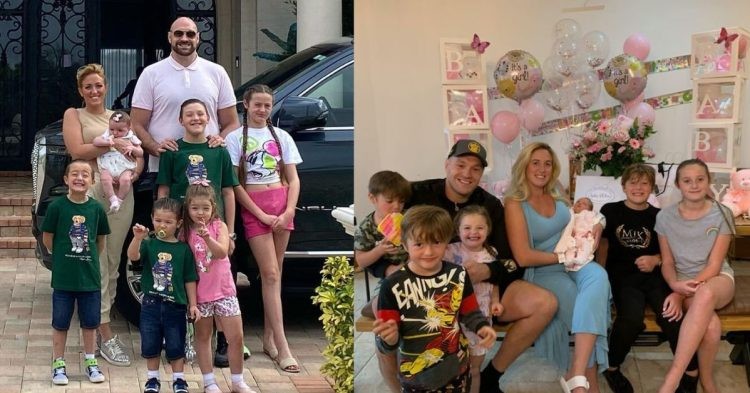 Tyson Fury with his wife and children (Credit: Instagram)

Tyson Fury is one of the most successful and popular boxers of the modern era. The heavyweight boxer has a professional record of 32-0-1 with 23 knockout wins. Fury has pretty much cleared out the division after beating almost every top contender, with his rivalry with Deontay Wilder considered one of the greatest of all time.

Apart from being a great boxer and a good role model, Fury is also known for being a family man. The heavyweight superstar has been married to Paris Fury for many years and has a large family. They are blessed with six children, and their youngest daughter Athena was born in 2021.

Tyson has three boys and named all of them Prince, after Prince Naseem who is Fury’s favorite boxer. The first boy is Prince John James who is 9 years old, the second one is Prince Tyson II, 5 years old and the youngest boy is Prince Adonis Amaziah, 2 years of age.

‘The Gypsy King’ once explained that he named all of their boys Prince because he is a “king and they’re princes until they earn their rightful name.” According to reports, Fury is looking to make an addition to his family and is expecting a seventh child.

Tyson Fury and Paris have been married for 14 years. They met when he was 17 and Paris was 15, and started dating soon after. They dated for two years and then in 2008, they traditionally tied the knot at St. Peter in Chains Catholic Church in Doncaster, South Yorkshire.

They now live a peaceful life in Morecombe, Lancashire, and Fury loves to spend time with his family. Despite being one of the most popular boxers of the current generation, Fury is known to be a humble and simple man.

‘The Gypsy King’ got his nickname from his family heritage. He comes from a family of gypsies and some of his family members are also professional boxers. According to Fury, his family has a boxing background that goes back to earlier times. His father, John Fury was a bare-knuckled fighter and had the nickname ‘Gypsy’ John Fury. Fury’s mother, Amber Fury is also a gypsy.

Fury’s all three brothers are professional boxers. The most famous one is his half-brother Tommy Fury and the other two are Shane and John. ‘The Gypsy King’ has two cousins Joshua Frankham and Hughie Fury who are also boxers but Fury is the most successful of them. His uncle and former trainer Peter Fury is now the boxing coach of Savannah Marshall.