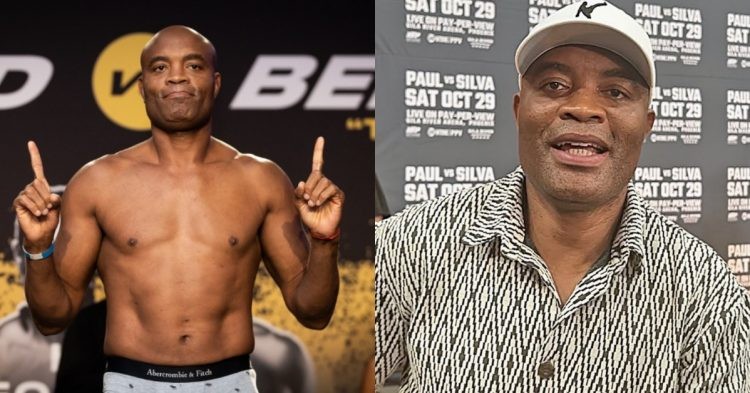 Anderson Silva will be back in the spotlight on October 29th, as he fights Jake Paul in Phoenix, Arizona. Silva’s last competitive fight was against MMA veteran Tito Ortiz on September 11th 2021. Earlier this year, he also had an exhibition match against Bruno Machado. Currently, the former UFC fighter holds a boxing record of 3-1 in his 4 fights.

Silva recently rubbished the rumours of his retirement and stated that he wants to continue fighting. Even if he loses to Jake Paul, The Spider has no intentions of stopping. But, at the age of 47, Silva does not have a long career ahead of him. However, recently Joe Rogan made an interesting observation. He is doubtful of Silva’s cleanliness heading into the fight.

During a recent episode of ‘The Joe Rogan Experience,’ Rogan questioned whether the event was holding adequate drug testing or not. If not, Rogan suspects Silva may just perform as he did in his prime with help of “Mexican supplements.” But why did Rogan make the comment? According to him, Silva’s movements are much more agile for a fighter of his age.

“At 47, I wouldn’t imagine he is not taking something. If you are taking something in your 47, that is not what we think of at 47. That is 47 with a body that responds like a 30-year-old”

Upon his return to boxing in 2021, Anderson Silva beat Julio Cesar Chavez Jr via a split decision. Chavez was more than 10 years younger than him. However, in the fight, it seemed as if Silva was the fresher contestant. Hence, Rogan’s suspicions are not completely without their merits. On top of that, Silva had a history of testing positive for PEDs during his UFC run.

There is no word on whether there will be drug testing for the event this weekend or not.

Anderson Silva, undoubtedly, is one of the best Mixed Martial Artists ever. With his 16 wins, Silva holds the record for the longest win streak in the company. But his argument for the GOAT position comes under question due to his failed drug tests. Throughout the course of his 14-year UFC career, Silva failed two drug tests. Once in 2015 and the second failed drug test came in 2017.

In 2015, Anderson failed a drug test for having drostanolone (an anabolic steroid), and androstane in his samples. Silva later claimed he took a sexual performance enhancer, which was contaminated with drostanolone. He was fined $380k and was suspended for 1 year. History repeated itself in 2017, as Silva failed another drug test for synthetic testosterone and a banned diuretic.

However, he did not suffer punishment for that, as USADA later announced that the failed drug test was due to contaminated supplements. Hence, it did not qualify as intentional doping. If Silva was found guilty, he would have faced a 4-year ban.