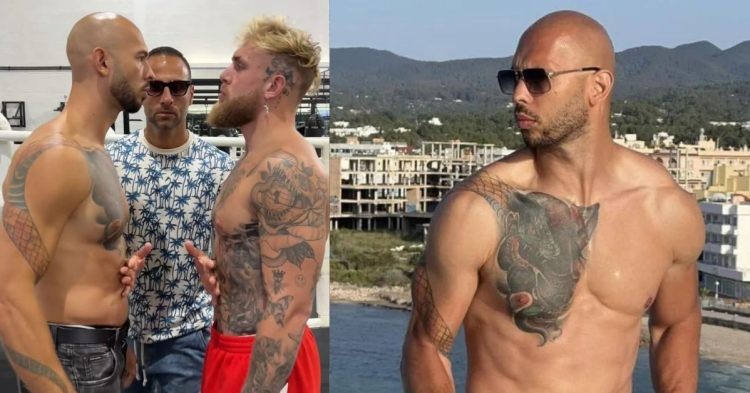 YouTube megastar turned boxer Jake Paul has taken the Combat world by storm following a recent tweet. The tweet he posted read ‘Negotiations’ followed by a video of Jake Paul facing off against the social media influencer and former World Kickboxing Champion, Andrew Tate. The meeting has put the fans on notice, as Tate has been in the headlines recently for his controversial opinions and “misogynistic” comments.

The move follows Paul’s victory over the UFC legend Anderson Silva in the boxing ring where the YouTuber turned boxer dropped Silva in the final round and secured a unanimous decision victory. Paul extended his boxing record to 6-0 with the victory.

Tate, however, has not stepped in any combat sports ring since his retirement from kickboxing in 2020. This potential matchup would be his return into combat sports after 2 years. Jake Paul’s subjected tweet is as follows:

Before rising to fame as a social media personality, Andrew Tate rose to fame as a kickboxer who competed at the world stage. He is under spotlight since he got banned by Facebook, Twitter, and Instagram for his remarks which were branded as misogynistic. But these developments don’t change the fact that Tate was a legit Kickboxer. Even veteran UFC commentator Joe Rogan stated on his podcast, “My 12-year-old and 14-year-old asked me about Andrew Tate. I said, ‘He’s a legit world champion kickboxer and I like him.“

Tate had amassed a kickboxing record of 85 fights out of which he won 76 wins and suffered 9 losses. The record is more than decent by kickboxing standards. Tate fought at the light-heavyweight class which would be approximately 200 lbs. Needless to say, it is really convenient that Andrew Tate falls in the same weight range that Jake Paul falls in.

Height and Weight Different Between Andrew Tate and Jake Paul

In his last boxing match against Anderson Silva, Jake Paul weighed in at 186.5 lbs. On the other hand, his potential next opponent, Andrew Tate is 6 ft 1 inches tall and weighs in at 198 lbs. Even though the 35 year old former kickboxer, Andrew Tate does not compete anymore he is still in shape and follows a carnivore diet for his lean physique.

The stats of both the celebrities have been mentioned below:

The bout could yield unexpected results as both the personalities have had combat sports experience. Jake Paul has had considerably lesser experience, but he has been active recently. Compared to him, Andrew Tate has been inactive, and if a bout takes place the ring rust could factor in considerably. We’re yet to see what developments take place in this situation.