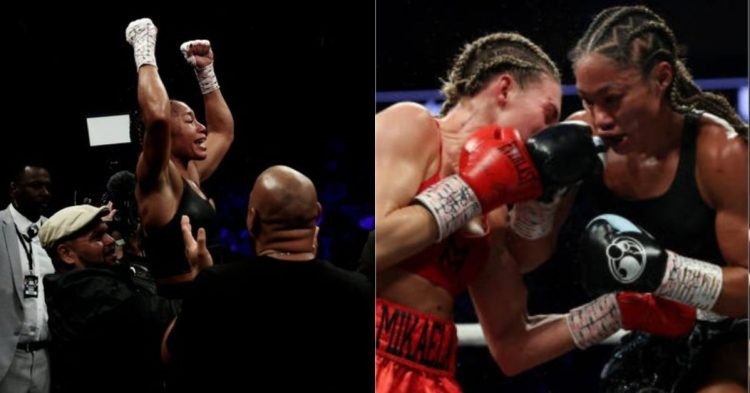 The co-main event of Claressa Shields vs Savannah Marshall saw a grudge match in the form of Mikaela Mayer vs Alycia Baumgardner for the unified super featherweight titles.

After 10 rounds of thrill and action, Alycia Baumgardner got the better of Mikaela Mayer to become the new WBO, IBF, WBC, IBO, and The Ring female super featherweight champion of the world.

It goes without saying, there was a lot of bad blood between both the boxers. However, when it came to the night of the fight, the duo showed no urgency and engaged in a calculated outing. After everything was said and done, fans were left petrified, first at how the fight played out, and second at the result of the fight.

While one can argue Baumgardner landed more powerful shots and made Mayer look like she was having trouble fighting with a cut on her eye, an argument can be made that Mayer was the better boxer and made great use of her jabs to earn the victory in terms of punches thrown.

“I think I landed cleaner shots, the harder shots,” Baumgardner said in her post-match interview.

Mikaela Mayer landed more jabs, however, Baumgardner had the upper edge in the body punches and power shots.

Here’s what the punching stats of Mikaela Mayer vs Alycia Baumgardner look like.

Mikaela Mayer threw 349 total punches, compared to Baumgardner’s 324 total punches. While Mayer landed 100 body punches, Alycia was a step ahead with a total of 110 connected strikes.

Mayer had a huge upper hand in the total jabs landed as she connected 61 jabs out of the 227 total strikes thrown. Meanwhile, Baumgardner was more focused on power punches, connecting only 32 jabs out of the 127 attempted.

It’s safe to say, the turning point of the fight was Baumgardner landing a ferocious 78, compared to Mayer’s 39 power punches.

The judges scored the contest 97-93 (Mayer), 96-95 (Baumgardner), and 96-95 for the winner by split decision and the new unified super featherweight champion of the world, Alycia Baumgardner.

Alycia Baumgardner has insisted that she will not give Mikaela Mayer a rematch and said she instead intends to pursue an undisputed fight with Hyun Mi Choi next.

In case you are wondering if there will be a rematch, Alycia has clearly stated she has no interest in a rematch, setting her eyes on the undisputed super featherweight gold.