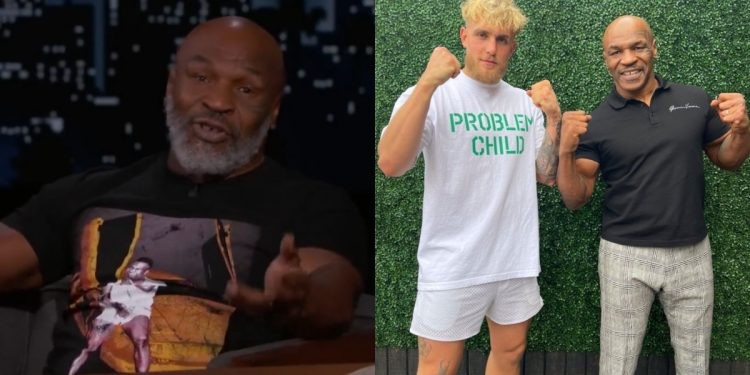 It looks like the much-anticipated boxing fight between Mike Tyson and Jake Paul is finally about to happen this year. Tyson recently appeared on a late-night talk show hosted by Jimmy Kimmel. He was asked whether a bout against the celebrity boxer Jake Paul interests him or not. Mike sounded very positive and showered Paul with praises.

Mike Tyson stated that he has a lot of respect for Jake Paul and what he is doing. According to the legendary boxer, Paul has millions of followers every time he has stepped inside the Octagon. That brings in a lot of money from the audience who generally would not pay to see a boxing contest.

Not only in the ring, but Jake has also done a lot for women’s boxing as well. He promoted Amanda Serrano as the Puerto Rican fighter went up against Katie Taylor inside a sold-out Madison Square Garden (MSG). His involvement ensured the biggest payday of Amanda’s entire career. Hence, Tyson lauded Paul for everything that he has done for the sport of boxing.

Mike labelled Jake as a credible opponent as well. He also confirmed that the bout has to happen this year itself. Tyson added,

Jake Paul clipped a portion of the interview where the 55-year-old boxer about him and tweeted,

Thank you to the great Mike Tyson for the respect and opportunity. This year we are making it happen. pic.twitter.com/dlGQUf2EP0

Will Jake Paul vs Mike Tyson happen in 2022?

Both Jake Paul and Mike Tyson seem interested in making the bout happen. Hence there is a sense of belief that the fight may finally come to fruition this year. The pair have been in talks to fight each other for a long time now.

While Jake Paul was busy with his fights against Tyron Woodley, Tyson has not been seen in the ring since his initial return against Roy Jones Jr in 2020.

If this fight happens, it will be a massive PPV event and perhaps the biggest one of the year so far. Even 5 years ago, nobody thought they would get to see Mike Tyson in the ring ever again, much less against someone like Jake Paul.

Hence the nostalgia factor and Paul’s current relevance in the pop-culture will certainly push the fight into being a PPV juggernaut.

Paul’s last fight against Woodley took place in December of 2021. Hence the organisers of the fight may be looking for a similar date that will make this event a holiday special.

Cards in the final month of the year have always done well. With Mike Tyson and Jake Paul featuring on the headline of such an event, it may shatter all the previous PPV records.