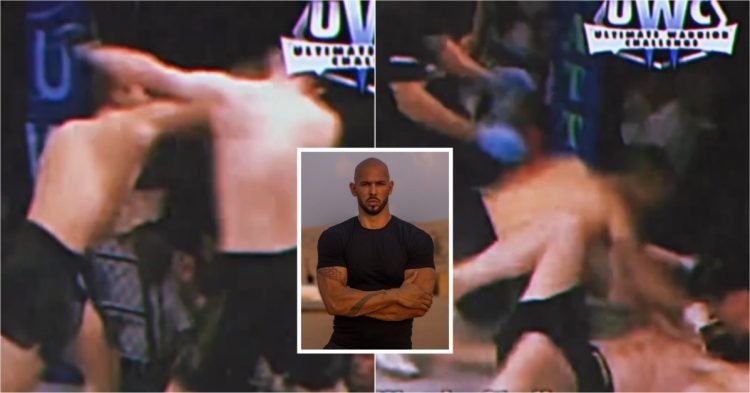 Logan Paul and Andrew Tate are not the best of friends. Although Tate shares a lot of respect for Logan’s younger brother Jake Paul, he is not so complimentary towards The Maverick. The two have traded verbal jabs quite often and have expressed their interest in fighting each other inside the boxing ring. However, Logan took it a step further recently!

During an appearance on the JEFF FM Podcast, Logan shared that he had a very precise dream. Apparently, Paul dreamt that he submitted Andrew Tate within the first 15 seconds of their MMA fight. But, not only in his dreams, Logan believes he can replicate the same in real life as well. Logan has a history in amateur wrestling. So he may not be wrong about being the superior grappler.

But, some very exciting footage dropped recently, where Tate was inside an MMA cage. The footage proves that Logan Paul’s dreams may not turn into a reality any time soon. In the clip, Andrew just walked down his opponent on his MMA debut and knocked out the man with some vicious strikes.

Logan will definitely have an advantage on the mat. However, in order to initiate the grappling sequence, the YouTuber-turned-fighter will have to get the bout on the ground. It is going to be incredibly hard for Logan to bypass Andrew’s big punches. If any of Tate’s hooks catch Paul flush on his chin, his dream will soon turn into a nightmare and the 15-second stoppage may go the other way!

What is the MMA record of Andrew Tate?

Nowadays, fans know Andrew Tate for his massive online fame. Tate is also quite a controversial character as well, who was de-platformed for his misogynistic comments. However, Tate is back on Twitter after Elon Musk‘s recent takeover of the micro-blogging site. Tate even put out a tweet saying that he will meet Musk in person and thank him for letting him back on the site.

However, Tate is not just a social media influencer. He was an elite kickboxer during his fighting years. Although there are conflicting reports on his kickboxing record, Tate held multiple world titles in the sport. But, his MMA career was a very short one. Tate had the most number of fights in kickboxing. But Andrew Tate did have some presence inside an MMA cage.

According to Tapology, Andrew Tate only had one MMA fight in his life. The fight took place on June 6th, 2010. His opponent was Shane Kavanagh. The 35-year-old also had an amateur MMA bout against Luke Barnatt. Top-G won both of his fights. He holds a pro-MMA record of 1-0.

Recently fans were excited to see Jake Paul and Andrew Tate come face to face. However, nothing came of it as Tate’s brother revealed both men respect each other too much for the bout to happen. But, Andrew may fight Logan Paul next.