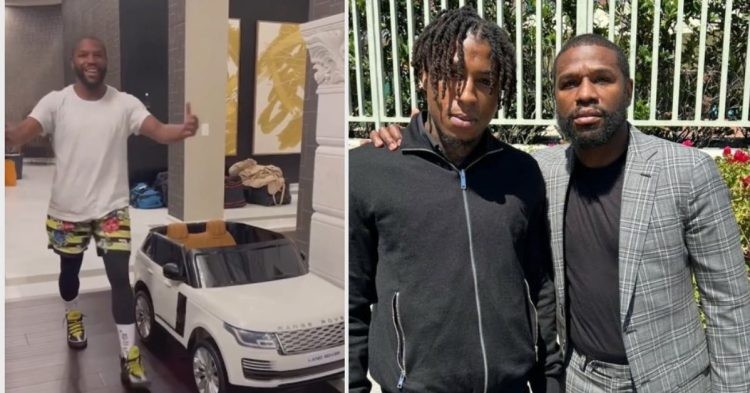 Floyd Mayweather is considered one of the most successful boxers and athletes of the modern generation. He is a billionaire, just like NBA superstar LeBron James, and has quite a business empire. Some of us are already aware that Floyd is the grandfather of NBA YoungBoy’s son. Mayweather’s daughter Ayanna and NBA Youngboy have a son together. His name is Kentrell Gaulden Jr.

It would interest many people to know that Floyd Mayweather recently bought his grandson an extravagant gift. The cost is estimated to be around $500,000. This might not be all that much for a billionaire like Floyd. Nonetheless, we should still wonder what he decided to buy his grandson with this substantial amount of money.

It seems Floyd is trying to create an impression as the world’s greatest grandpa. He decided that a fitting gift for his grandson would be a miniature working range rover. This is clearly a customized gift as few companies would actively manufacture something like this for a child.

Mayweather seems to be raking in more money than ever. He admitted the money for the Rover came from the money he earned in merely the press conference of the Mayweather- Deji fight. Moreover, he has even claimed that he might get his grandson a mini Lambo next time.

“Look what I got my grandson. So today, a baby range rover. Tomorrow?… a baby lambo.”

In any case, little Kentrell Jr is a lucky infant. He is only 1 year old as he was born only last year. NBA YoungBoy is also establishing himself as a successful rapper in the music world. Floyd’s daughter Iyanna made the news many years ago for pleading guilty to stabbing a woman. She and YoungBoy are not married. However, there is no arguing that they share a bond and permanent connection thanks to their child.

Floyd Mayweather wants his grandchild to have the best that this world has to offer. They say money can’t buy happiness. However, to quote another rapper Eminem, “It can buy crazy as* happiness”. That is exactly what Floyd is gifting Kentrell Gaulden Jr.