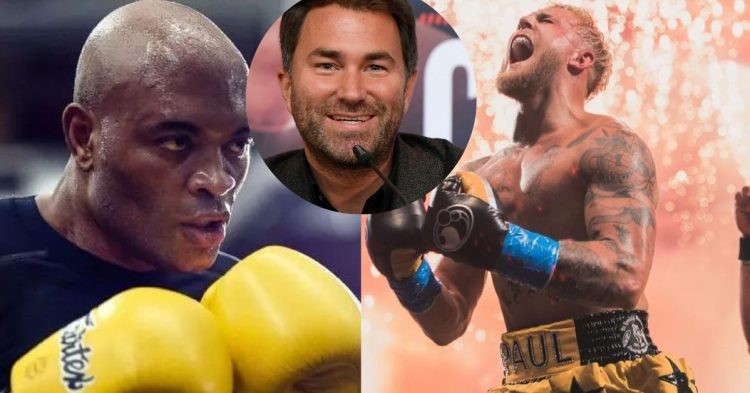 Even though Eddie once stated that Jake Paul was just a YouTuber turned boxer and would never be a world champion, he is now favoring Jake more than Silva for their upcoming boxing bout. In a recent interview, Hearn picked Jake to beat Silva and said:

“To defeat Anderson Silva, while boxing is still a very impressive part of his repertoire, he’s still not a boxer, and he’s 47 years of age.”

Anderson is a world-class striker and has built his name in UFC and boxing as well when he knocked out Tito Ortiz. However, he is old now and Jake has improved very much recently with his boxing. Talking about Silva, Eddie stated:

“But he’s a tough guy, he has a huge profile, he can box, and I think he’ll be competitive.

I don’t think he beats Jake, because I think Jake is young, and I think he can punch a bit, and I’m intrigued to watch, and I like what Jake’s doing. It’s kind of him against the world,” he added.

Even though Paul is new to the boxing world in comparison to other professional boxers, he sure does know how to draw attention and elevated YouTube boxing in the past year.

Anderson Silva Is a Big Challenge for Jake Paul

Even though Jake has an unbeaten boxing record, Jake Paul has never faced an actual striker in the boxing ring. With a win against the UFC legend, Paul will prove to be a legitimate boxer.

UFC President Dana White also pointed to ‘Spider’ as a true test of the internet personality. Hearn believes that Jake can beat some boxers and after Silva’s fight; if he faces some actual boxers, his credibility will rise in the sport. As for Silva, Hearn said:

“I don’t know enough about Anderson Silva. Anderson is 47, but he can box a bit by the sound of things.”

Talking about Jake and his chances in professional boxing, Eddie stated:

From the start of his boxing career, Jake had been ridiculed and a series of wins against some influencers did little for his career in boxing. However, after knocking out Ben Askren and former UFC champion Tyron Woodley, Jake has earned more respect both from the fight fans and the MMA world.

But Jake has yet to face a good striker and after choosing Silva as his opponent ‘The Problem Child’ is drawing more attention than ever. Paul vs. Silva will be played out on October 29th on Showtime PPV.