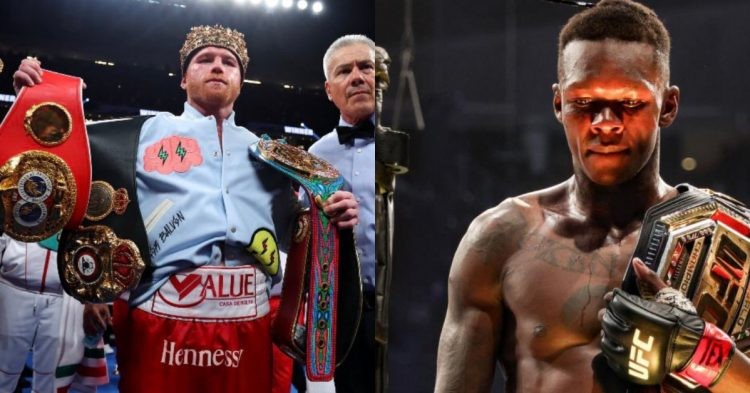 The age-old debate about the pay difference between boxers and MMA fighters continues. Canelo Alvarez recently completed his trilogy against Gennady Golovkin and bagged a guaranteed purse of $45 million. It has sparked a conversation regarding the payment of the UFC fighters who are at a similar level to Canelo but in MMA.

Recently, former UFC heavyweight and light heavyweight champion Daniel Cormier revealed a little secret regarding how much the UFC champions really make. In recent years, the info regarding the pay of UFC fighters is not available in public. Hence, it was hard to know how much elite fighters like Conor McGregor, Israel Adesanya and Khabib Nurmagomedov really made.

According to DC, the current middleweight champ of the world, Israel Adesanya, makes $5-7 million per fight. Former UFC champ and lightweight GOAT, Khabib Nurmagomedov made $10 million per fight. Whereas the biggest superstar in MMA, Conor McGregor, earns around $15-20 million every time he fights. However, it does not include the PPV points.

Although the figures seem very high compared to what an average fighter makes in the UFC, it is nowhere near what a boxing champion earns. For example, for the recently concluded fight against Gennady Golovkin, Canelo earned a guaranteed purse of $45 million as per Kevin Iole. On top of that, he may get PPV points which will increase his total payout by a lot.

It definitely raises the question of why there is such a big pay discrepancy between MMA champions and boxing champions. Conor McGregor has sold more PPVs than anyone in MMA history, but his pay is still half of what Canelo Alvarez makes. As for someone like Adesanya, Canelo’s purse absolutely dwarfs what the Kiwi gets paid.

Saul ‘Canelo’ Alvarez has been linked with fights against Conor McGregor, Kamaru Usman and Jorge Masvidal previously. However, he always dismissed the rumours and stated that he would stick to fighting opponents from his sport instead of MMA fighters. Recently, he had a back and forth with Kamaru Usman where Canelo revealed that Usman only wanted the fight because of the payday.

During a recent interview with GQ, the 32-year-old was asked about why MMA fighters are underpaid compared to the likes of himself. His answer included a dig toward UFC.

“I think, in general, boxers don’t earn the same, they don’t all earn the same, each one earns differently. But, yes, I think boxers earn more. I don’t know why. I don’t really know. I think in MMA, there is only one promoter, one company that I think controls them more. I think that’s why.”

What do you think about the issue? Do you think Canelo’s comments about UFC’s dominance in the sport of MMA are legit? Let us know in the comments down below.

“Never Appeared to Me That We Were Poor”- Draymond Green Shares How His Mother Hid Their Financial Struggles From Him Despite Earning $17,000 a Year