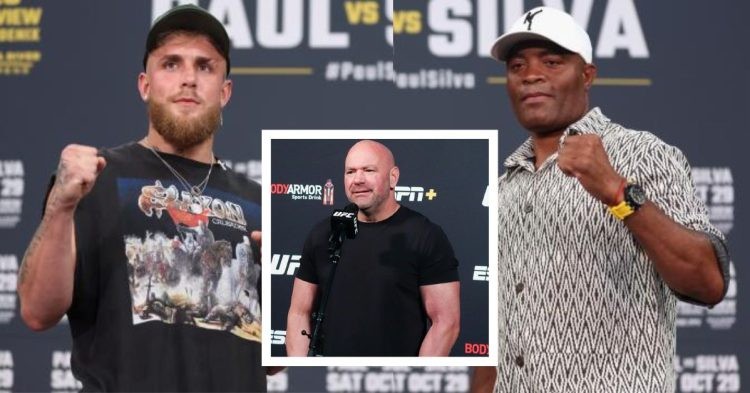 UFC legend Anderson Silva and YouTuber-turned-boxer Jake Paul are ready to face each other in a boxing bout on this Saturday, 29th October. Ahead of the fight, Paul and Silva came face to face in the pre-fight press conference, where Paul upped the ante with an interesting bet.

‘The Problem Child’ has always been in a battle against the UFC president Dana White over the fighters’ pay. On numerous occasions, Paul has openly discussed this issue while accusing White of not paying the fighters an adequate amount of money.

In the pre-fight press conference, Paul made an offer to Silva and again brought out the topic of fighters’ pay. Agreeing to fight Silva in a kickboxing match if he loses, Paul said:

“But if I win, me and you come together to create a united fighters association to help UFC fighters get better pay and better healthcare. You become the interim president and we unite to help these fighters once and for all.”

For a long time, many UFC fighters have spoken about payment issues. Some fighters like Jared Cannonier and heavyweight champion Francis Ngannou stated that they were in debt. Many of the fighters from UFC have even transitioned into boxing to make a better payday.

Most recently, Paul debated with Stephen A. Smith over this and expressed his desire to give the UFC athletes a better chance and more control over their contracts like athletes from the NFL and NBA.

It seems the boxing fight between Jake Paul and Anderson Silva is just a start, as both of them agreed to face each other again – in a kickboxing ring if Paul loses to Silva this weekend.

During the pre-fight press conference, Paul made a bet that if he loses, he will fight him in an MMA fight next. To which ‘Spider’ replied: “You’re so smart because I don’t fight MMA anymore.”

Then Paul changed the terms saying: “OK, kickboxing,” and Silva accepted the offer. Paul then added if he beats Silva, they will make a fighters’ union to help the MMA fighters. Silva agreed to the terms and both fighters shook each other’s hands.

Paul has been a frontrunner when it comes to talking about the fighter’s payout in UFC. Given the dangerous consequences of being in a combat sport, Paul and some other people believe that the fighters should receive more payouts and better healthcare.

However, White disagreed with this statement that the fighters are receiving what they deserve. Former UFC fighters Tyron Woodley and Ben Askren transitioned into boxing to fight Paul. Both of them lost but walked away with the payout.

As far as the kickboxing fight is concerned, Silva has been considered one of the greatest fighters of all time. Since coming into the boxing world, Paul has also teased a transition into MMA. However, if this potential kickboxing fight plays out, Paul will need to be more careful and prepare for someone so dangerous as Silva.