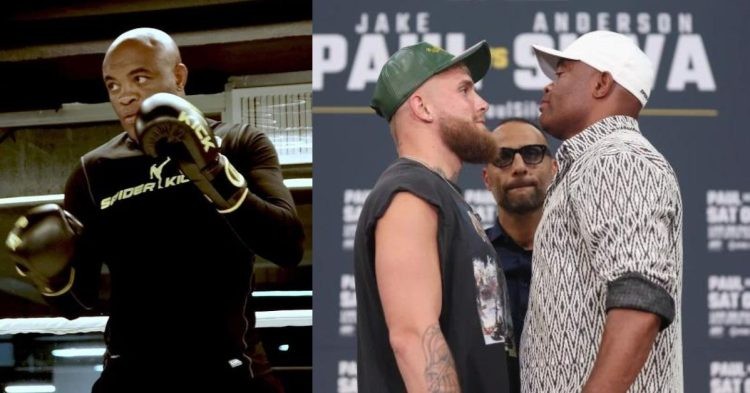 UFC legend Anderson Silva is preparing for his fight against Jake Paul which is scheduled to take place this Saturday night in Arizona. While preparing for this bout, Silva claimed that his sparring partner knocked him out twice during the sparring sessions.

‘Spider’ is now 47 years old and still entertaining the fight fans while showing incredible skills inside the boxing ring. In his boxing career, Silva has victories over former world champions like Julio Cesar Chavez Jr., Bruno Machado, and most recently Tito Ortiz.

However, in his boxing debut, Osmar Luiz Teixeira knocked down Silva. And looking at his age, some fans are concerned about Silva for his upcoming bout against his undefeated opponent, Jake Paul.

In a recent interview, Silva stated that he is training with high-level boxers and his sparring partner knocked him down. Silva said:

“I’m training hard for win. I’m training with the good boxers of a high level, and five guys have come to help me.”

The UFC legend also said after getting knocked out, his coach, Luiz Carlos Dorea told him to prepare for war against Paul after. Silva added:

However later his coach denied the claim insisting his fighter is fit and ready for his upcoming fight. On the other hand, Paul has looked phenomenal in his recent bouts. He has knocked down former UFC champions Tyron Woodley and Ben Askren.

Jake Paul will be hoping to get a knockout win against Anderson Silva in their upcoming boxing bout. Silva is known for showboating in the middle of fights. He often drops his hands and utilizes phenomenal head movement to dodge his opponent’s attacks.

In a recent clip on social media, Paul stated that he saw a lot of openings and will look to exploit them. ‘The Problem Child’ predicted a knockout saying:

“Knockout of the year incoming. Yeah, I’ve seen this a bunch of times. And every time I see it I just find more openings. He loves to get in that corner and dance. I’m not going to play that s**t, it’s my ring, it’s my fight, and I’m the A-Side for a reason. He’s not going to come in there and do that s**t, I’m not going to feed into it.”

In his fight against Tito Ortiz, Silva used this technique and then knocked out Ortiz with a counter. However, this showboating has put Silva in danger before.

When ‘Spider’ tried to do that against Chris Weidman at UFC 162, he was caught with a hook and was knocked out in one of the most upsetting defeats of all time. Undoubtedly, Silva is a world-class fighter but he will need to be careful in his fight against Paul.