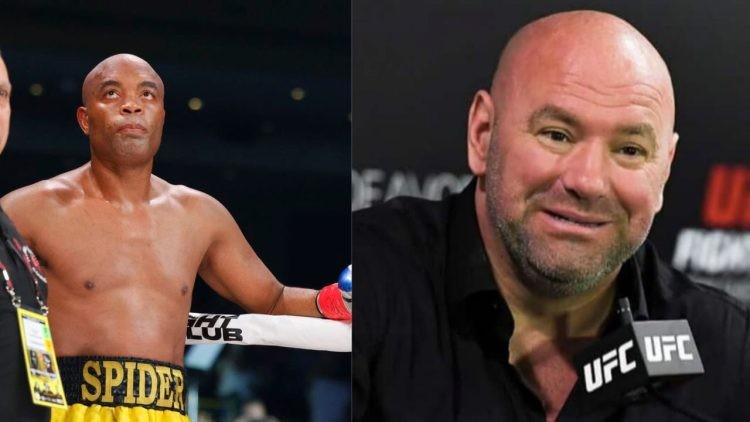 Anderson Silva will forever be one of the GOATS of the UFC and MMA. During his 14-year stint with the UFC, Anderson was easily one of the organization’s biggest draws. As such, the Brazilian had some interesting thoughts reflecting on his time working with Dana White.

“The Spider” parted ways with the promotion almost two years ago. Since then, Silva has been plying his trade as a celebrity boxer. Currently, he’s preparing for a much-anticipated boxing match against YouTube star Jake Paul that takes place on Oct. 29 in Glendale, Ariz.

Speaking with The MMA Hour, Silva shared his thoughts about Jake Paul’s highly publicized feud with UFC President Dana White over fighter pay. He says, “My personal opinion, of course the UFC can pay the fighters better. Especially a couple of fighters doing something very, very incredible inside UFC and make the UFC name strong and powerful. Make more [respect] for the brand. But everything is about, talk to your manager, have a good thing behind you to protect you, so you don’t sign something you don’t like in the future. A lot of very talented fighters sign something very crazy because the manager doesn’t take care of the fighters. It’s only about numbers and money, and that’s the problem.”

Talking about Dana White in particular, Anderson further adds, “My problem with Dana is [when he] talks about fights because Dana has never fought MMA in his life. That’s my problem, when he talks about, ‘You can’t do that, can’t do that, you don’t fight correctly.’ No, no, no, that’s my only problem with Dana. I think Dana is a good person. Everybody talks about Dana, ‘He’s not good, blah blah blah.’ He’s a good person, but he’s a businessman.

Moreover, Silva talks about how grateful he is to be a free agent. Unlike before, Anderson feels as though as he is in charge of what he wants to do. “I don’t need to ask permission from the UFC or from Dana for absolutely nothing anymore.”

What Is Anderson Silva Upto After Retiring From the UFC?

Following his departure from the UFC, ‘The Spider’ has been keeping busy with another sport. As such, he’s picked up two wins in the boxing world – a decision win over Julio Cesar Chavez Jr. and a knockout of Tito Ortiz. Silva also took on Bruno Machado this past May in an exhibition bout that was ruled a no contest.

My toughest test yet. I respect the legend, but he must be exterminated. @MostVpromotions presents #PaulSilva from Phoenix, AZ @GilaRiverArena

For the most part, Silva is enjoying his retirement and only indulging in fighting as a hobby. However, he is currently faced with one of the biggest challenges in his boxing career in the form of Jake Paul.

Paul vs. Silva is good to go for October 29 at the Gila River Arena in Phoenix. Additionally, the bout will be available to watch on Showtime PPV with the main card set to kick off at 9 p.m. ET. Who do you think will win this fight? Leave your pick in the comments below.