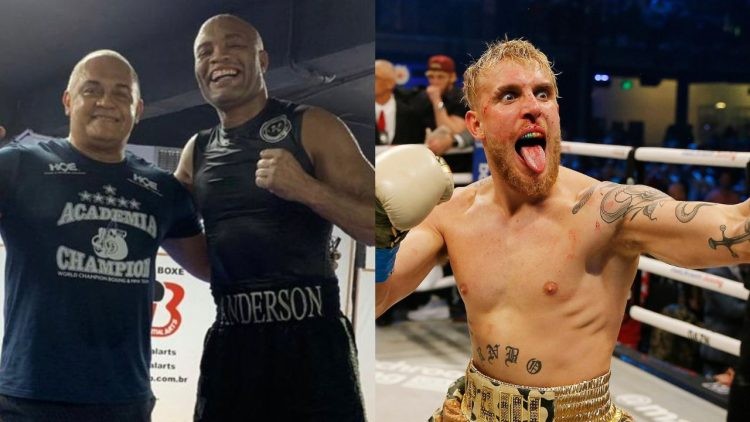 Anderson Silva and his boxing coach are ready for Jake Paul

Anderson Silva will forever be a legend in MMA. However, following his departure from the UFC, ‘The Spider’ has been keeping busy with another sport. Although many might not know it, boxing has always been more than a hobby for Anderson.

Silva made his professional boxing debut back in 1998. On the occasion, Anderson lost against Osmar Luiz Teixeira and didn’t return to the sport until 2005. In his return fight, the former UFC middleweight champion managed to beat Julio Cesar De Jesus via knockout during the 2005 bout.

My toughest test yet. I respect the legend, but he must be exterminated. @MostVpromotions presents #PaulSilva from Phoenix, AZ @GilaRiverArena

Currently, Silva is working on his boxing with his coach, Luiz Carlos Dorea. Speaking about Jake Paul, Luiz said, “He has to think of an exhibition. If he’s considering an (official) fight, I think he will pay dearly. In promoting, it’s all valid. He’s doing his part, using his tongue, but you can’t use your tongue inside the ring. You have to use your fists, and it’s a whole other story. Anderson is far better.”

Additionally, Silva occasionally spars with his sons, Kalyl, 22, and Gabriel, 24. In a video posted on Instagram, Anderson took on both of his sons at the same time. Just like in the old days, Silva is seen slipping the punches and taking no prisoners, dominating the session against the aspiring kickboxer.

As such, Silva is now scheduled to take on YouTube star Jake Paul in a 187-pound boxing match on Oct. 29 in Phoenix. Despite 47 years of age, fans are confident that Silva is Jake Paul’s toughest challenge to date.

Since parting ways with the UFC in late 2020 Silva has looked good. He’s picked up two wins in the boxing world – a decision win over Julio Cesar Chavez Jr. and a knockout of Tito Ortiz. Silva also took on Bruno Machado this past May in an exhibition bout that was ruled a no contest.

As such, Anderson’s professional boxing record stands 3-1. On the other hand, Paul has now compiled a record of 5-0 with three of those wins coming over MMA champions Ben Askren and Tyron Woodley (2).  Although Jake is young and fiery, Silva possesses the IQ, knowledge, and the experience

Paul vs. Silva is good to go for October 29 at the Gila River Arena in Phoenix. Additionally, the bout will be available to watch on Showtime PPV with the main card set to kick off at 9 p.m. ET. Who do you think will win this fight? Leave your pick in the comments below.