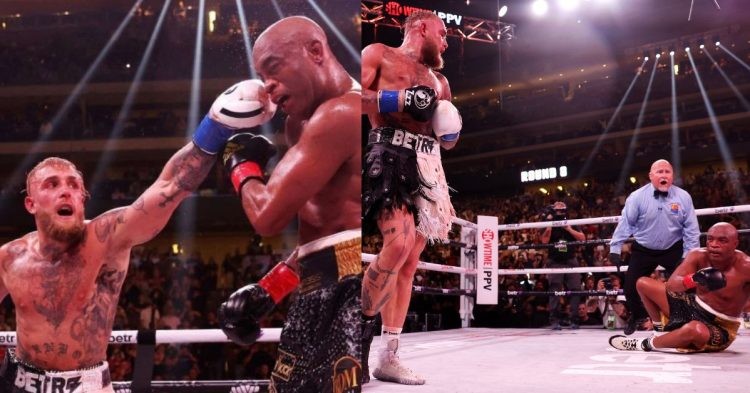 Jake Paul defeated Anderson Silva in their much-anticipated boxing bout. In the last round of the fight, Paul knocked Silva down much to the surprise of many boxing fans. However, some fans believe that Silva was offered money to lose to the YouTuber turned-professional boxer.

‘The Spider’ reportedly made $500,000 for his fight against Paul. He was coming off an impressive knockout victory over Tito Ortiz. Silva is considered one of the world’s greatest strikers, but losing to a YouTuber-turned-boxer has sparked some controversy among the fight fans.

One fight fan took to Twitter and posted a clip from the fight, “Anderson took the bag.”

Another user implied that Silva was not fighting at his full power and he made the fight easy for Paul. He wrote, “You could see every time Anderson had a clear shot he used 5% of strength.”

Silva is one of the most decorated fighters in combat sports history. That is why some fans rejected the idea of the Brazilian taking money to lose. One user wrote, “Nah. Not Anderson. He way too respected. He respects combat sports.”

Nah. Not Anderson. He way too respected. He respects combat sports.

When Paul knocked down Silva, it looked like the shot barely landed. Moreover, some fight fans had a hard time accepting that Paul could knock down a legend like Silva. Another fan wrote, “The right missed bro. Other angle proves it. This knockdown was only deciding factor in the fight and it was a fluke.  Silva much more polished throughout.”

Silva and Paul headlined the Showtime event and their clash was very entertaining, given the hype they brought. ‘The Spider’ lost this fight and made no excuse in the post-fight presser. He promised to return to action soon. For Paul, he improved his professional boxing record to 6-0 with 4 knockouts.

Jake Paul won the biggest fight of his career on Saturday night after he beat Anderson Silva by a unanimous decision. Fight fans and analysts have said that Paul has improved drastically as a boxer. Moreover, Paul knocking down the UFC legend earned him great respect from both the boxing and MMA community.

However, some fans suggest that the fight was fixed and Silva was paid a hefty amount to lose against Paul. People accused Paul of match-fixing before when he knocked out former UFC champion Tyron Woodley and Ben Askren.

In those previous fights, Paul knocked out both fighters with one single punch. Some professionals like Joe Rogan and Georges St-Pierre believe that Jake is a legitimate fighter and can knock out people with one punch. On the other hand, some fight fans came up with their theory and stated that Paul paid off his opponents to lose.

UFC fighters earn comparably very low to professional boxers. Woodley and Askren made the most money in their fight careers. In the second bout, Woodley earned around $2 million. While Askren made $500K as per the report.

Some fight fans still believe Paul needs to fight a professional boxer rather than calling out retired and old fighters. Paul was previously scheduled to fight Tommy Fury and Hashim Rahman Jr. Unfortunately both of those fights were canceled. Perhaps next time a fight against a pro boxer will prove Paul’s legitimacy.