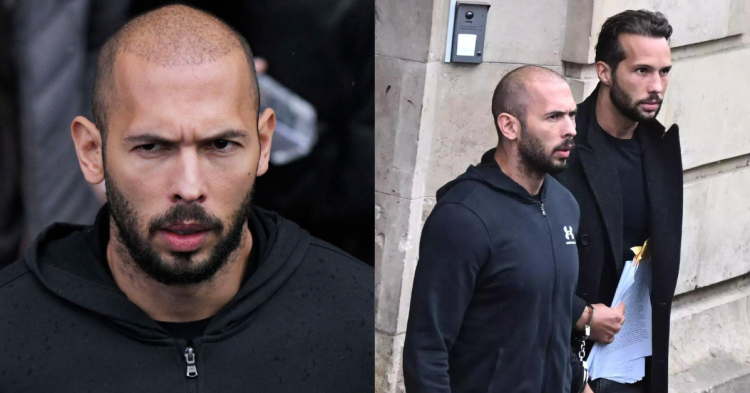 Andrew Tate has sent out his first message from prison. (Credits: YouTube)

Following his arrest in Romania, Andrew Tate is currently in detention. Previously, the 36-year-old was arrested along with his brother Tristan and two unnamed people. According to reports, Tate and Co. were arrested on suspicion of human trafficking, r*pe, and forming an organized crime group.

Since his arrest, many fans have come out supporting the “Top G” and protesting for his immediate release. The controversial social media influencer has garnered a vast following worldwide with younger men making up most of his audience. In his first message to fans since his imprisonment, Tate wrote about the conditions of his holding cell.

“They are trying to break me. Thrown inside a cell without light. Cockroaches, lice, and bed bugs are my only friends at night. When the guards bring me to and from the courtroom, I stay absolutely respectful. They try to pour hatred into my heart.” Further, Tate continues the message, stating that his ‘iron will’ is being tested to its fullest inside the court and by his prison guards.

Notably, Tate mentions how his prison guards know that he is “innocent”. He insists that they are simply doing their jobs as they have families to feed. Moreover, Tate emphasizes the fact that he will continue to treat everyone with utmost respect and courtesy, be it inside the courtroom or from his cell.

Most importantly, it is understood that Andrew will now be able to receive messages whilst in prison. As such, an email address has been posted by the former kickboxing world champion, where fans and supporters can send him mail.

Latest update about Andrew Tate from the Romanian prison

Recently, it was revealed that Andrew will be allowed 5 visitors, besides his lawyer, Eugen Vidineac. Surprisingly on the list was Twitch streamer and influencer, Adin Ross. The pair have become friends over the past few months, collaborating on content across various social media. According to Adin Ross, Tate has taken him under his wing and inspired him to become a better version of himself.

Unfortunately for Ross and other Tate admirers, their idol will be behind bars for a little longer than anticipated. Previously, Tate’s sentence was extended by 30 days by the judge presiding over the case. According to the judge, Tate’s wealth and influence could hamper investigations. However, it appears that the duration of their detention has been further increased, until February 27.

Besides my lawyer, I'm allowed 5 visitors,

4 are family members and the 5th is @adinross

It is understood that all of Tate’s properties, including his supercars, will remain under police custody during that time. Moreover, it is also being checked whether Tate’s properties were acquired legally or through money that was laundered. Whilst Tate is still in detention it is believed that if the investigations reveal admissible evidence, it could be extended by up to 180 days, which is half the calendar year.

Although there is no news of any substantial evidence, there were rumors of potential wiretap leaks which prove Tate’s guilt. Should the leaked evidence prove to be legitimate, and he is indeed guilty, Tate will reportedly be sentenced to 15-20 years of imprisonment.

Do you believe that Tate will see the outside of his prison cell anytime soon? What are your thoughts on him being able to receive messages? What more will Tate reveal next? Leave your thoughts in the comments below.