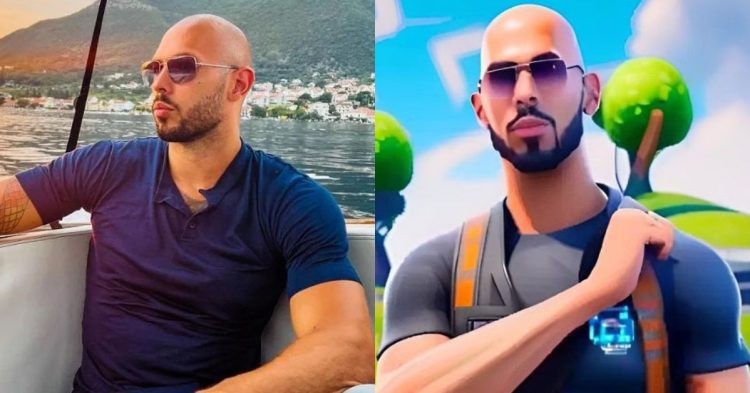 Fans have been wanting Andrew Tate to be added into Fortnite for a long time. (Credits: YouTube)

By now, everyone with an internet connection has probably heard or read the name, Andrew Tate. The former kickboxing world champion and influencer has made quite a name for himself. As such, it has led to rumors of him becoming a part of the video game world as well.

Particularly, when it comes to Epic Games’ Fortnite, fans have been hoping to see the ‘Top G’ in-game. However, given the recent controversies and his arrest in Romania, a collaboration with Tate is highly unlikely.

For the most part, Andrew Tate on Fortnite became a trend for two main reasons. Firstly, AI software, known as ‘Dream Booth,’ was being used to make mock-ups of Tate in Fortnite. Even though the AI-generated images were fan-made and unofficial, they were enough to get the rumor mill running.

Secondly, popular Fortnite YouTubers like Jarvis and Kay started creating content related to him. With some of the biggest creators on the scene mentioning Tate, it led people to believe that he was about to be added to the game.

Moreover, Tate also appeared on a podcast with a Fortnite pro player named Clix, which also created a lot of hype in the community. During the podcast, Tate labels Clix and another player as spoiled brats, before encouraging them to develop themselves as capable human beings. The interaction won over a lot of people and portrayed the Top G in a positive light.

Under a video of a made-up skin of Tate, people commented good things. “Omg what a legend & your a king & this is fire

” and more. Although we are certain that a lot of fans would love him to be in the game, the risk is not worth it for Epic Games.

Recently, Tate was arrested on suspicion of human trafficking and r*pe, among other things. Following their initial arrest, Tate and Co. were sentenced to detention for a period of 30 days. Due to their influence and wealth, the judge presiding over the case denied their appeal seeking a release as he believed it would hinder investigations.

Currently, Andrew is still in detention along with his brother and their other accomplices. It is understood that Tate and Co. will remain in their detention center for the entire 30 days. Thereafter, if the investigations reveal new and viable information, Tate could see his detention extended up to 180 days.

As such, in the worst-case scenario, and if he is found guilty, Tate will reportedly be imprisoned for 15-20 years. Currently, there are no new updates on the case, as investigations are still underway. Thus, fans of the Top G will be praying for the best possible outcome and his immediate release.

If he does get dropped on all charges, do you believe Tate would make his appearance in a video game? Will any company take the risk? Even though it is highly unlikely, feel free to leave your thoughts on the matter in the comments below.