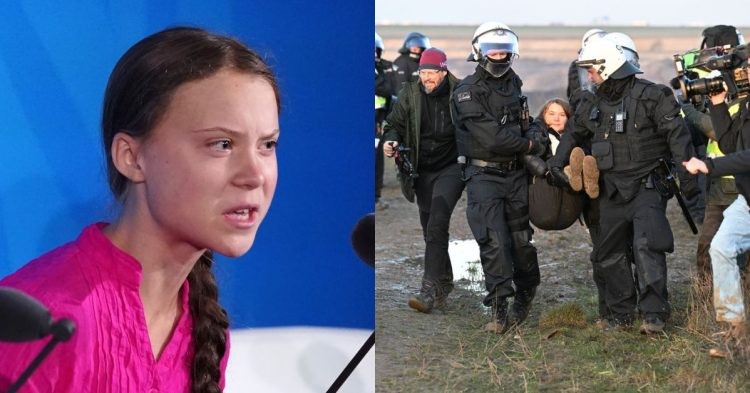 Greta Thunberg detained (Image Courtesy - The Mirror and The Atlantic)

Greta Thunberg is one of the world’s most renowned environmental activists. She was recently detained alongside other activists on Tuesday. They were protesting against the demolition of Luetzerath, a coal village. The entire group was slated to be released just hours later.

“There is no reason to hold them for days. It might take hours or they will go immediately,” said a spokesperson for the Aachen regional police, talking about the group of protestors. Thunberg along with a group of other activists was held while protesting at the open-cast coal mine, Garzweiler II which lies around 9 km away from Luetzerath.

Riot police removed activists from the village’s buildings. Only a few remained, hiding in trees and an underground tunnel. Thunberg and some other protestors, however, remained at the coal mine and staged a sit-in. Thunberg sat in a police bus all alone after being detained, according to witnesses.

The 19-year-old protestor was carried by three policemen and then held at a spot away from the sit-in site. However, the teenage protestor seemed unbothered by this turn of events.

Thunberg was one of the more vocal protestors at Lutzerath. She addressed the nearly 6,000 protestors who marched toward Lutzerath on Saturday, saying the mine’s expansion was a “betrayal of present and future generations.”

Greta has now gone viral twice in less than a month after her feud against Andrew Tate set Twitter ablaze. Many lauded her comeback against Tate to be one of the best in Twitter history.

Andrew Tate fans were overjoyed at Greta Thunberg being detained

After the feud between Andrew Tate and Greta Thunberg, the Swedish activist became the primary target of Tate fans’ ridicule. So her being detained at Lutzerath presented the perfect chance for Tate fans to troll Thunberg. And they didn’t miss the opportunity, capitalizing on it instantly, calling her detention a product of karma.

Karma is something else pic.twitter.com/MCLmTnOgQE

However, many of Thunberg’s admirers also pushed back on this notion. They even ridiculed Andrew Tate and his fans for his arrest. They stated the fact that Thunberg would be let go soon unlike the Top G.

This her knowing that she’s going to jail for doing something right while that roll on deodorant head guy is in there for being a ræpist pic.twitter.com/XwAo3s6BuK

Now that’s the right way to get arrested, Andrew Tate on the other hand… pic.twitter.com/FXL7ELsZhh

Despite Andrew Tate fans having the time of their lives mocking the young activist, she will enjoy the last laugh. After all, Tate is still in jail and Greta is set to be released very soon. It seems fans of the Top G will have to wait for another opportunity to get the upper hand.