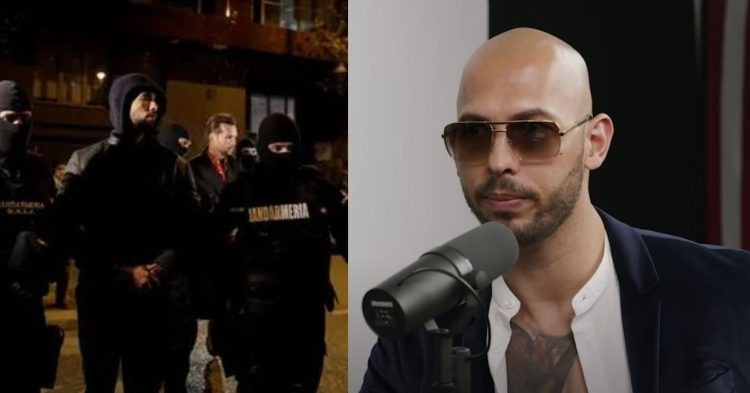 Andrew Tate has been in the public limelight for a while now. After going viral and even getting de-platformed in 2022, the former kickboxing champion remains a person of interest, for various reasons.

Most recently, Andrew made the headlines after he and his brother Tristan were apprehended by Romanian police on December 29. Following his response video to Greta Thunberg, many believed that authorities were able to track Andrew down via the pizza boxes that appeared in his video.

“They’re either gonna try to put me in jail or they’re gonna kill me.” pic.twitter.com/LyZoZgJ5t4

Among the plethora of videos suggesting his release, a video of Tate predicting his arrest has also gone viral. In a podcast, Andrew is seen talking about his ‘three strikes’ where he refers to his de-platforming as the first strike. “They’re either gonna try to put me in jail or they’re gonna kill me. I would never kill myself under any circumstances, ever.”

The ‘Top G‘ believes that the ‘Agents of the Matrix’ will try everything in their power to try to silence him. As such, Tate is certain that an attempt will also be made on his life and that it will be covered up as ‘suicide’.

The controversial internet celebrity has often been criticized for his ‘misogynistic’ and ‘hateful’ comments which have split public opinion to the point where people either love him or hate him. Currently, Andrew is being held in one of many Detention and Preventative Arrest Centers across Romania.

Why is Andrew Tate in jail again?

On December 29, Andrew and his brother Tristan along with other unnamed suspects were arrested on the grounds of human trafficking, money laundering, and attempting to form a crime group.

Moreover, on December 30, the Romanian courts extended Andrew and Tristan’s custody period from the initial 24 hours to 30 more days. Tate’s lawyer Eugen Constantin Vidineac revealed that despite there being no grounds for their detention, the judges have made this decision, presumably to ensure a proper investigation of the matter.

With Tate suggesting that he will be arrested despite having a lawyer, do you think he is wrongfully imprisoned? Are the ‘Agents of the Matrix’ truly at work or is Andrew just another example of the boy who cried wolf? Leave your thoughts in the comments below.