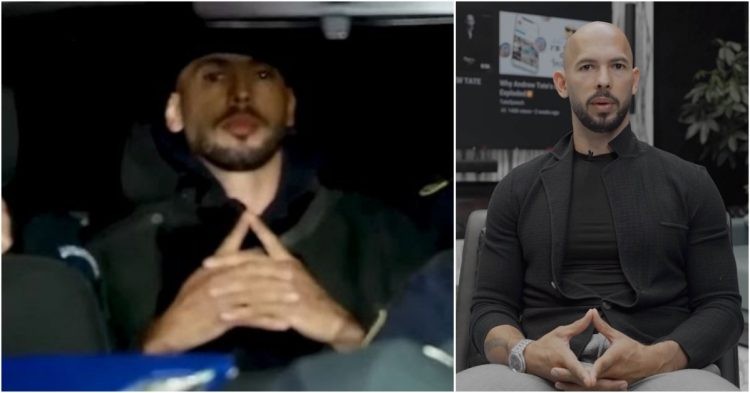 Andrew Tate was one of the most searched men in 2022. By the looks of it, he will also end up on the list in 2023 as well! He was detained on 29th December 2022 in Romania. Although he is currently behind the bars, fans can not seem to stop talking about the former 4-time kickboxing champion. It is only about to increase as new video surfaces of his detention.

Fans have seen the images of Tate in handcuffs as cops were taking him away. However, a new video shows what Tate had to say while the cops were escorting him out of his residence. As he was sitting in the vehicle, Tate made his famous hand gesture, which was seen as a way of communicating with his fans. Although Tate’s Twitter is active, he is in detention.

Perhaps, the hand sign was his only way of communicating with millions of his followers worldwide. However, some may wonder what the hand gesture actually means.

Top G often preaches the message of escaping the matrix. Hence, the hand gesture is a metaphor for his pursuit of higher intelligence. It perfectly fits his motto of gaining enough knowledge to break the system. However, some fans also speculated if it was, in any way, related to Illuminati or not.

But the reality is much different. According to a report from “The Daily Star,” Tate’s hand gesture is derived from Yoga. It is also known as “Uttarabodhi Mudra.” It is a Sanskrit phrase that means the awakening of the intellect.

Andrew Tate reveals the origin of his hand gesture

Andrew Tate always encouraged men to step out of their shells and express themselves. He also sets an example with his lifestyle, which he wants young men to achieve. So his hand gesture is just one of many character traits he wants to impart to others. However, it was not something that he came up with himself. In a video, Tate explained its origins.

The 36-year-old was always influenced by his father. Emory Tate, Andrew’s father, was an international master of chess. He also served the American government in the airforce and also as a spy. Hence, he was a highly intelligent man. According to Tate, his father used to make this hand sign while playing competitive chess. So Tate emulated that in his life.

However, he wants everybody to do it and revealed the benefits. He added, “The reason I do it is because when your brain is as advanced as mine you have to complete the circuit. I am full of electricity, my blood is on fire and by completing the circuit. Try the hand symbol, combine and complete the circuit of your body, make the electrons flow. I do it because it increases my power. It’s like a power up.” (h/t via The Daily Star)

Similar to his father, Andrew also wanted to become a chess player when he was young. But after his parent’s divorce, he moved to the UK and started a career in kickboxing instead.

Back to the matter at hand, Tate is currently in detention for a period of 30 days. Meanwhile, the Romanian authorities seized all his luxury vehicles. If he is found guilty of the charges which include human trafficking and the alleged abduction of two women, he may find himself in prison for 20 years.