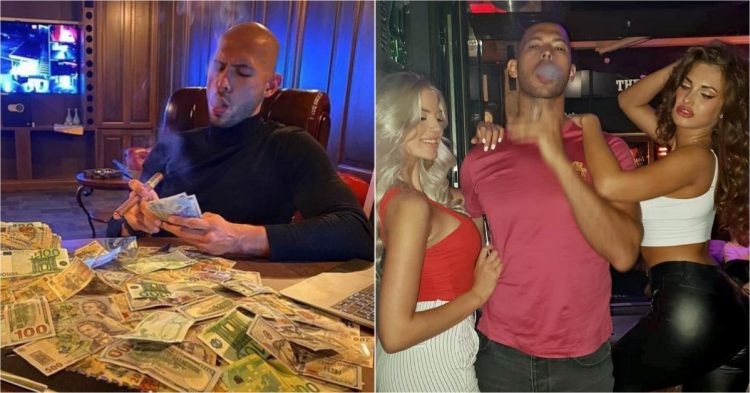 Andrew Tate is facing a barrage of charges. (Credit Mirror)

Andrew Tate certainly has kept the fans on the edge since December 29, 2022. On that day, Tate was arrested in Romania from his luxury villa. The local outlets reported that Tate was taken away with the alleged charges which included r*pe, human trafficking, and even money laundering. However, the money laundering charges were just speculation up until now.

However, Romanian outlet Digi24 has dropped a bombshell on Andrew Tate. Apparently, the prosecutors got their hands on a tape, where Tate allegedly confesses to the allegations against him. Andrew and his Tate’s Angels were accused of forcing women to perform lewd activities on pornographic websites. Not only did the Tate brothers force the women, Top G and Tristan reportedly even branded them.

The report added that Tate branded the models with a tattoo on their backsides. Some women also alleged that they were not allowed to take any time off and had to work around the clock. Upon further investigations on the matter, the prosecutors also got their hands on a wiretap where Tate was talking about his business practices.

Andrew Tate : You’re not stupid and you can probably guess how I make so much money. I have to hide what I’m really doing.

Andrew Tate : I’ve been doing this for a long time with a team of girls working on video chat. The company was fake, but this is how I laundered my dirty money. Some of the girls who worked for me (…) I used them to do other things. To move money or illegal things, documents, etc. I will never do that with you. (translation via Google)

Andrew Tate faced a ban across social media platforms in the latter half of 2022. Quotes surfaced where Tate made comments which are called out for being misogynistic. But prior to his arrest, Tate went on Piers Morgan‘s podcast where he gave justifications for his comments. However, he was on the Romanian authority’s radar since early 2022.

In April last year, authorities questioned the Tate brothers after two women came forward with abduction allegations. Allegedly, Andrew and Tristan withheld them without their consent. But not much came off it at the time, as no charges were pressed against Tate.

However, the recent detention suggests that the Romanian police may have some solid evidence against the Tate brothers. The brand new revelation of the wiretap transcriptions is just another indication that the walls are perhaps closing in on the former Big Brother contestant. But, there are some question marks on the validity of the transcription as well.

The report does not provide the actual audio and only the quotes. So there is no way to verify the validity of the report. However, there have been instances where Andrew Tate admitted that the webcam service was a scam. He revealed that the models were designed to take advantage of men.

Andrew revealed, “It’s a total scam. The model just has their hands on a keyboard that isn’t even plugged in. I have real professionals who are fluent in English behind the scenes getting men hooked, finding out their interests, the name of their dog… A guy will come online, they’ll say, ‘How’s Sparky?’ It’s an operation of professionals who lure these men in.” (h/t via Mirror)

What are your thoughts about the alleged confession from Andrew Tate? Do you think it damages his claims of innocence? Let us know in the comments down below.

Zinedine Zidane Rejects USMNT Offer – Why Did He Make This Decision?