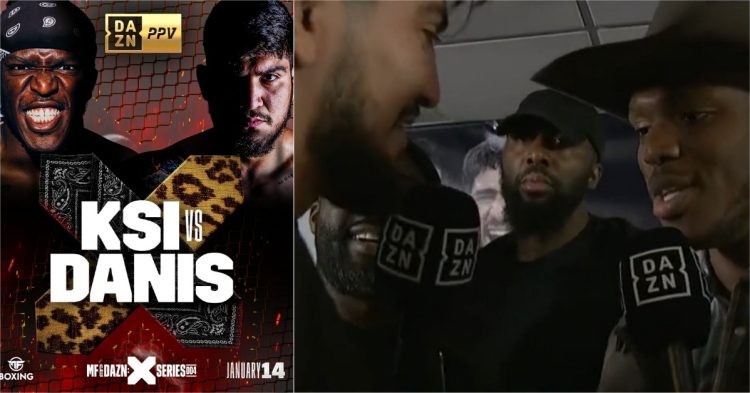 It is official! British YouTuber-turned-boxer KSI will fight Dillon Danis on January 14th, 2023. There were whispers going on that the fight was in the works. But fans can finally breathe a sigh of relief, as DAZN confirms that the much-anticipated bout will kick off the new year in style. Fans can catch it live on DAZN and the fight will headline MF & DAZN: X Series 004 inside the OVO Arena, in London.

Dillon Danis got into a heated altercation with KSI ahead of this announcement. He caught up with KSI during a Misfits Boxing event and dared him to accept his challenge to fight. The 29-year-old then proceeded to throw a cup of coffee at KSI’s face.

Real name Olajide Olayinka Williams Olatunji, KSI was understandably upset with the whole fiasco. He took the opportunity to call out Danis on Twitter. His tweets indicated that an official announcement was imminent. Ultimately that turned out to be the case as less than 24 hours later, the bout is official.

Can Dillon Danis beat KSI in a boxing match in 2023?

Dillon Danis rose to fame in 2018, when Khabib Nurmagomedov targetted him during the infamous UFC 229 brawl. He is a close associate and grappling partner of UFC superstar Conor McGregor. Hence he got a lot of exposure to the fans. He is a high-level BJJ black belt and holds an MMA record of 2-0. Both of his fights took place in Bellator and he won them via first-round submission.

But his stand-up is not on the same level as Conor McGregor‘s. The upcoming bout will mark his boxing debut, so KSI will definitely look to exploit that. KSI, who is also new to the sport, has a pro boxing record of 3-0. His last two bouts came on the same night. In August earlier this year, he beat Swarmz and Luis Pineda in the same event. Interestingly, his first pro win came against Logan Paul in 2019.

Logan did quite well against Floyd Mayweather during their exhibition bout in 2021. So the win over Paul has aged quite well. Hence, KSI seems to be a big favorite over Danis, who has huge question marks over his fighting career. Dillon’s last fight was in 2019, against Max Humphrey in a Bellator cage. Although he is still under contract with the promotion, he does not seem interested in fighting.

Hence, an almost 4-year gap in active competition does not bode well for “El Jefe.” Danis’ BJJ experience far outweighs KSI’s, but the bout will take place inside a boxing ring. So, it will be interesting to see what happens in the contest. But, Dillon appeared to be the bigger guy during their recent scuffle. Will he have more power than KSI in the ring? Fans will find out on January 14th.