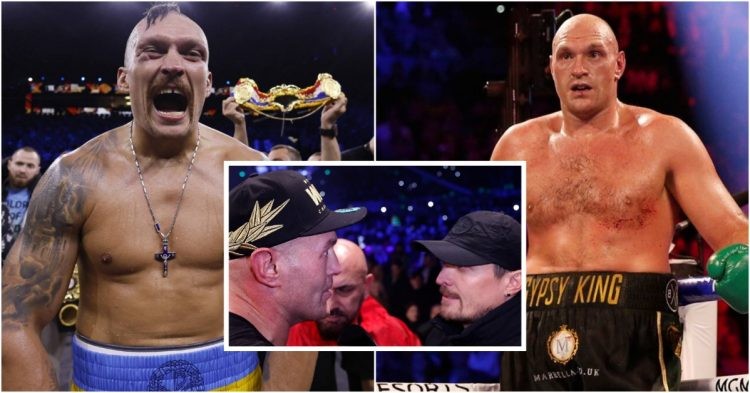 Tyson Fury and Oleksandr Usyk are in talks to fight each other. (Credit: Twitter)

It looks like Tyson Fury is not taking any time off from fighting! The WBC heavyweight boxing champ defeated Derek Chisora for the third time on December 3rd. Fury was as dominant as ever and won the bout via a 10th TKO inside the Tottenham Hotspur Stadium. Fans wanted to know when they will get to see the champ in action once more and they found their answer relatively quickly!

Fury wanted to fight the other British superstar heavyweight Anthony Joshua ahead of the Chisora fight. However, Tyson is now focusing on Oleksandr Usyk. Reports are adding that The Gypsy King is in talks to return early next year to fight Usyk for the undisputed heavyweight belts. As previously mentioned, Fury has the WBC heavyweight belt and Oleksandr holds the WBA (Super), IBF, WBO, and IBO heavyweight belts.

‼️ Tyson Fury vs Oleksandr Usyk for the undisputed heavyweight world titles is “almost done”, Usyk’s manager Egis Klimas has declared. Camps have been in negotiations for weeks prior to the Derek Chisora fight. Target dates of Feb 18th – March 4th in Middle East. [@talkSPORT] pic.twitter.com/fFEWabpkik

The Ukrainian fighter holds a professional record of 20-0, while the Brit has a record of 33-0-1. As the fans know, Fury is coming off a win over Derek Chisora. Oleksandr Usyk, on the other hand, defeated Anthony Joshua twice in his last two bouts. They are clearly the two best active heavyweight fighters and their eventual fight promises to be a grand one!

Date and location for Tyson Fury vs Oleksandr Usyk

Oleksandr Usyk’s manager, Egis Klimas, spoke to talkSPORT to confirm the negotiations. According to him, both parties are in contact, and there are possible locations and dates when the bout may take place. Although London and Qatar are in consideration for the event, Egis also revealed that Saudi Arabia is another possible venue.

“We’ve been in negotiations even before the [Chisora] fight, that’s why we showed up to the fight… so, I’ve been speaking with Queensbury promotions before and we spoke to Top Rank [on Thursday] morning on a conference call. All of us got together and we are almost done, there is not much left to talk… two heavyweights, the best in the sport today, undisputed heavyweight championship bout, that is what the fans need.”

Qatar has emerged as a potential host for Tyson Fury vs Oleksandr Usyk, Usyk’s manager Egis Klimas has revealed. He said Saudi Arabia remains most likely for the undisputed fight, which is already in advanced negotiations. Target dates of Feb 18th – March 4th. [@talkSPORT]

“Most likely it is going to be no later than March 4 and most likely it will end up in the Middle East. But during today’s conversation I heard other options are coming like maybe London, Qatar… but, most likely we are aiming for Saudi [Arabia] because they are very interested in that fight, Saudi [Arabia] loves Usyk.”

Usyk’s manager has seemingly set March 4th as the deadline for the bout. So fans can expect an official announcement regarding the exact date and venue for the fight in the coming few days. As Klimas said, Saudi Arabia is a familiar place for Usyk because his last fight against Anthony Joshua took place in the country. So Oleksandr would like to go back to his lucky venue.

However, London would be a great place for the bout also. The city has hosted numerous big boxing fights in the past and it will give Tyson Fury a home advantage. On the other hand, Qatar may also secure the bid to host the fight and their recent history of hosting the FIFA World Cup 2022 will give them a big boost.

Oleksandr Usyk has now posted the selfie he took with Tyson Fury after facing off with him on Saturday night. He captioned it: “Belly button what’s up?” pic.twitter.com/yyAtgSMvnR

After the news broke, Usyk took to his Instagram and posted a photo where he seemingly called out Fury. The two recently faced off after Fury’s win over Chisora. During that, Fury claimed that he would fight Usyk next. It appears that the champ is a man of his word and is set to fight Oleksandr Usyk early next year.