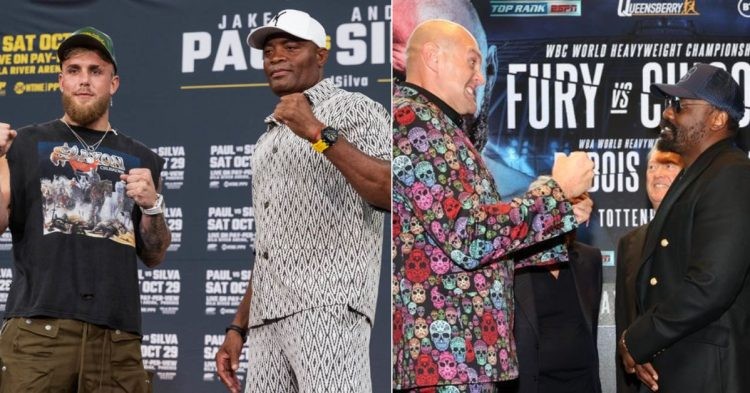 Fans were left shocked and disappointed after it was announced that Tyson Fury will come out of retirement following his TKO win over Dillian Whyte earlier this year to take on Derek Chisora on December 3, later this year.

After possible years of waiting for Fury to finally share the boxing ring against Anthony Joshua, fans were hoping the Gypsy King would take on Oleksandr Usyk even if the AJ fight doesn’t capitalize. However, as it turned out, Fury will take on boxing veteran Derek Chisora, who has lost three of his last four fights. At 38 years of age, Chisora is far from his prime, and moreover, Fury has already faced and defeated him twice inside the ring.

Additionally, the incessant call-outs from Fury are being taken less seriously now, what with the Gypsy King opting to fight a “washed-up” Derek Chisora. The criticism for Tyson Fury’s next fight is such that fans are even supporting Jake Paul, who has been at the receiving end of backlash from boxing fans ever since he stepped inside the boxing ring couple of years ago.

Jake Paul takes on UFC legend Anderson Silva in a featured bout this weekend on PPV. The same will be the case with Tyson Fury vs Derek Chisora 3, which will be a PPV event, streaming live on BT Sports Box Office.

If you get some spare time this week. Re-watch Fury vs Chisora 2. One of the most one sided beat downs you will ever see. Since then Fury has gone to another level. The audacity to make a 3rd fight between these two friends is astonishing. Especially at this time for UK boxing..

‘We’ the Public, Should Boycott Fury vs Chisora. It’s not the fight we want to see. We need to showcase ‘Public Power’.
Actually this should be the protocol for all ‘Mockery Fights’

Fury vs Chisora 3 is everything that’s wrong with boxing. Not competitive! 2 old pals sparring charging PPV for it.

This is why we don’t get Fury vs AJ because the pair of them know they can make similar money against lower level guys and make mugs of the public paying for it.

While some demanded fans boycott Fury vs Chisora 3, others pointed out how the fact that this bout was even made proves boxing is a “circus these days”. While the support for Jake Paul vs Anderson Silva hasn’t been anything extraordinary, it is still decent compared to Fury vs Chisora 3.

What are your thoughts on Tyson Fury taking on Derek Chisora next? Do let us know in the comments section.