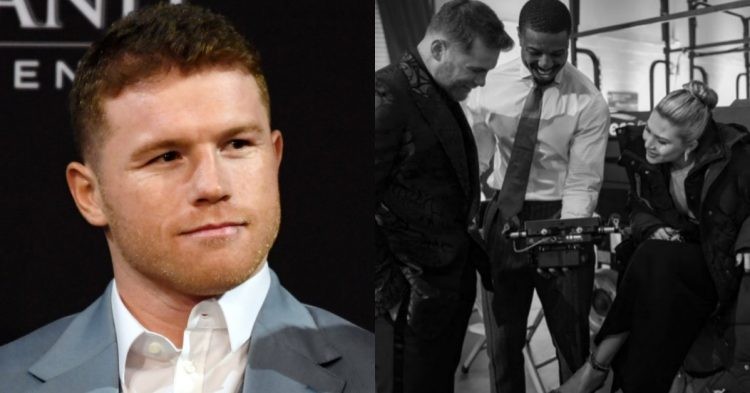 From the ring canvas to celluloid, combat sports athletes are slowly but surely making the move to the big screen. Earlier, reports revealed that Conor McGregor will be making his Hollywood debut with a remake of an 80s cult classic, ‘Road House.’ Now it looks like Canelo Alvarez will follow suit as he is set to appear in the franchise which is built around boxing.

In a recent Instagram story, Michael B. Jordan revealed that Canelo will appear in the third instalment of the Creed franchise, ‘Creed 3.’ Canelo Alvarez is already perhaps the most popular active fighter in boxing. So appearing in such a prestigious movie franchise will certainly boost his star power even more, while creating some buzz for the movie as well.

“DIRECTING THE LEGEND HIMSELF @CANELO IN CREED III. CAN’T WAIT FOR THE WORLD TO SEE ON MARCH 3. A STAR INSIDE THE RING AND OUT…WELCOME TO THE FAMILY. GOOD LUCK THIS WEEKEND!” (via michaelbjordan)

Although the movie is still a few months away. fans can see Canelo back in action this weekend against Gennady Golovkin. The Mexican will defend his WBA (Super), WBC, IBF, WBO and The Ring super middleweight titles against GGG. After two insanely entertaining fights, the trilogy will certainly be a spectacle for the fans to enjoy.

The much-anticipated third fight between the two bitter rivals goes down on September 17, inside the T-Mobile arena in Las Vegas.

Although Canelo Alvarez has appeared in a few documentaries previously, he is yet to star in a massive Hollywood movie. To be honest, this is the best place for Canelo to start his Hollywood journey. Creed is a spin-off franchise of the acclaimed boxing franchise ‘Rocky.’

The first instalment of the franchise came out in 1976. It told the story of a struggling boxer from Philadelphia called, Robert ‘Rocky’ Balboa. The film was nominated for multiple Academy Awards and won 3 Oscars for Best Picture, Best Director and Best Film Editing. The main star of the movie, Sylvester Stallone was also nominated for the Best Actor award that year.

However, the franchise ‘Creed’ focuses on the son of Rocky’s frenemy Apollo Creed, Adonis Creed. The character of Adonis is portrayed by Michael B. Jordan. The franchise kickstarted in 2015 and it was directed by Ryan Coogler. Coincidentally, Coogler will also direct the upcoming ‘Black Panther 2‘ which features former UFC welterweight champ, Kamaru Usman.

The third instalment of the ‘Creed’ franchise will be directed by Michael B. Jordan and it will hit the theatres on March 3rd, 2023.