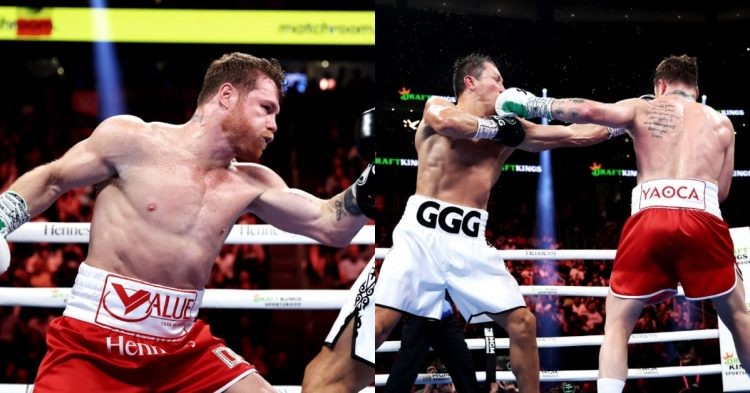 The trilogy of a lifetime just went down inside the T-Mobile Arena! After 4 years of bickering back and forth, Canelo Alvarez and Gennady Golovkin finally finished their much-awaited third fight. Canelo was the A-side in the fight as he was defending his WBA (Super), WBC, IBF, WBO and The Ring super middleweight titles against the challenger GGG. So how did the fight go? Let’s find out!

Canelo Alvarez started off on the front foot as he tried to land some big shots very early on in round 1. GGG’s early attempts to land on Canelo went in vain as the Mexican displayed elite head movement. Unlike the first two fights, Golovkin could not find a way around Canelo’s guard in the first round.

Canelo landed a total of 5 punches in the opening round out of an attempted 33, while GGG landed 3 out of 36

GGG’s movements inside the ring were very tentative. While he was trying to fire up some jabs, he couldn’t find Canelo with any meaningful success. Canelo, on the other hand, landed a big hook which rocked Gennady’s head back. As the round went on, Canelo landed punches with more and more accuracy. At the end of round 2, GGG was clearly on the back foot.

GGG landed a total of 10 punches here out of an attempted 37 while Canelo landed 13 out of 30 in the second round.

Canelo kicked off the third round with a big body shot. The speed difference between the two was evident as the 32-year-old started to be more aggressive in the fight. With just a minute left on the clock, the crowd gave a big reaction as Canelo walked down GGG and landed a big hook. Fans expected Alvarez to get a stoppage win and it seemed after 3 rounds like the bout was heading that way.

In this particular round, GGG landed 7 punches as he attempted 36. Canelo on the other hand landed 9 out of 39.

Canelo’s jab was as quick as a cobra. Every time Alvarez went in, GGG had no answer. He either had to step back or he absorbed the strikes. The dominance of Canelo was very evident after just 4 rounds as GGG’s face was clearly marked up from all the jabs from Saul Alvarez.

In this round, Canelo once again landed 9 punches after attempting 41, whereas Golovkin landed 6 out of 39.

Canelo Alvarez started dominating the fight from the 5th round onwards

GGG’s corner advised him to be more active ahead of round 5 and that is what he did. He tried to turn back the clock and land some quick jabs as he did in the previous two fights. But he seemed like a shell of himself as Canelo did not care for any of Golovkin’s offences. Alvarez landed some big body shots and a massive overhand right at the end of the 5th round.

In round 5 Canelo crossed the double digits as he landed 11 punches while attempting 35. GGG landed 9 out of an attempted 39.

GGG was 40 years of age heading into the fight and it showed! He was extremely flat-footed and his reflexes were clearly not upto the mark. Canelo’s jab was getting through Gennady’s guard over and over again. GGG also seemed to be wary of Canelo’s power and it slowed him down even more. By the end of round 6, it was evident that he needed a finish to win the bout.

In the 6th round, Canelo landed 13 punches while GGG landed 9; they attempted 37 and 46 punches respectively.

GGG looked like he was just one step behind his opponent at all times. On every occasion that Canelo landed, it seemed to get a visible reaction out of GGG. At the end of round 7, Canelo basically seemed to be in cruise control as he was moving around the ring without any fear.

In this round, Canelo attempted 43 punches while landing 11. GGG landed 9 punches as he attempted 42.

Even in round 8, Canelo seemed to be in really good shape and did not slow down a bit! He landed punches on will and he even tried to bait GGG into backing him into a corner to land something big. It was clear that he wanted a finish against his biggest rival. Canelo landed 15 punches in this round out of 53 attempted, while GGG landed 12 out of 47.

In round 9, GGG finally seemed to wake up. With a minute left in the round, the two seemed to let their guard down more and exchange in a pocket. But Canelo did not go back into a shell as he fired back with some power punches of his own. It seemed like the only round so far that the judges may score in favour of the older fighter.

By the end of this round, Alvarez landed 11 punches out of 55, while Golovkin landed 14. It was the first round of the fight where Gennady outlanded Canelo.

GGG opened up round 10 just the way he finished the previous round. He started throwing heavy punches toward Canelo. For the first time in the fight, Canelo visibly took a step back. But the Mexican fighter turned his attention back to body shots as he landed a punch to GGG’s midsection which did some damage. However, GGG showed signs of life in the latter rounds which made the fight interesting heading into the last two rounds.

The trend of GGG out-landing Canelo continued in this round as the Kazakh fighter landed 16 punches as opposed to Canelo’s 10.

Canelo attempted a big upper-cut more than once in the fight. But he seemed to miss the target every time. Compared to the previous few rounds, round 11 was less eventful. But perhaps both were saving their energy for the last round. Gennady once again landed more punches this round as he landed 14 while Canelo landed 11.

GGG had to get a finish in the last round and he showed intent in the opening seconds. But it was Canelo who took the step forward as Gennady looked to engage in a clinch to stop Canelo’s momentum. The ref had to step in multiple times to separate the two. It was high time for GGG to throw the caution to the wind and let go of his hands. But he seemed more than happy to survive the final bell.

In the final round, Canelo took the lead once more as he landed 12 punches compared to GGG’s 11. In total, Canelo had landed 130 strikes out of an attempted 487, while GGG landed 120 out of 521. The shocking difference is in power punches as Alvarez landed 85 and Golovkin only landed 46.

After 12 rounds of domination, Canelo Alvarez won the fight via unanimous decision. The judges scored the fight 116-112, 115-113 and 115-113 for Canelo as he retains his status as the undisputed super middleweight champion. As evident by the punching stats mentioned above, the scorecard is definitely questionable.

One may wonder what would have happened if GGG had managed to take the lead and outwork Canelo Alvarez in one of the earlier rounds.