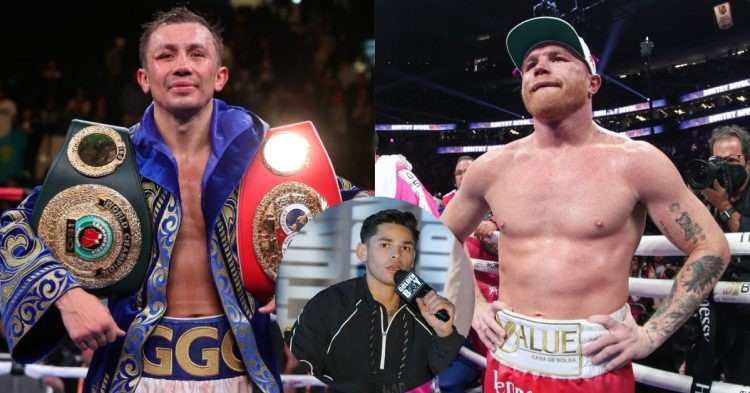 Canelo Alvarez will be back in action this weekend on September 17th as he takes on his arch nemesis Gennadiy Golovkin in a twelve-round trilogy bout that will take place at the T-Mobile Arena in Las Vegas. There will be a lot at stake for the Mexican boxer as his status as the undisputed super middleweight champion will be on the line in this fight.

This rivalry between Canelo and Golovkin has been epic as both their fights were filled with action and were extremely close. Going into this battle, Saul Alvarez has the edge over Gennadiy as he won the rematch after their first fight ended in a draw.

As we inch closer to this trilogy fight, several boxers and experts are chiming in and have offered their predictions. Surprisingly, Ryan Garcia has picked Golovkin to emerge triumphant against Canelo and has explained why the Mexican boxer will lose this battle while speaking in an interview with DAZN.

“The way I just see things the way they are. I will give the edge to Golovkin on one reason. Both of those fights were good fights. It was not like Golovkin was ever out of the fight. But too Canelo is coming off a loss and he looks too angry, he looks out of focus. It is not his character.”

“I wouldn’t be surprised if Golovkin wins. So I’m gonna go with the underdog this time around. But it’s nothing towards Canelo.”

It seems like the beef between Ryan Garcia and Canelo Alvarez is not squashed yet as both the boxers have made some harsh comments about each other.

Can Gennadiy Golovkin defeat Canelo Alvarez in the trilogy fight?

Gennadiy Golovkin last fought in April 2022 against Ryoto Murata where he picked up a terrific ninth-round stoppage win to unify the IBF and WBA middleweight titles. He will now face his biggest rival Canelo Alvarez in a trilogy fight in an attempt to become the undisputed champion.

However, after looking at his last fight, it would be very difficult for the 40-year-old middleweight to outclass the Mexican world champion. Ryoto Murata troubled GGG with his speed and pressurised him with body shots.

One can expect Canelo to land at a high output and use his speed to torment Gennadiy. However, that doesn’t mean Golovkin does not stand a chance as he still has the knockout power and Saul will be very of a threat that his rival possesses.

In the end, fans can expect another thrilling contest between these two superstars that could well go the distance. Do let us know in the comments section who you think will win this trilogy between Canelo and GGG.