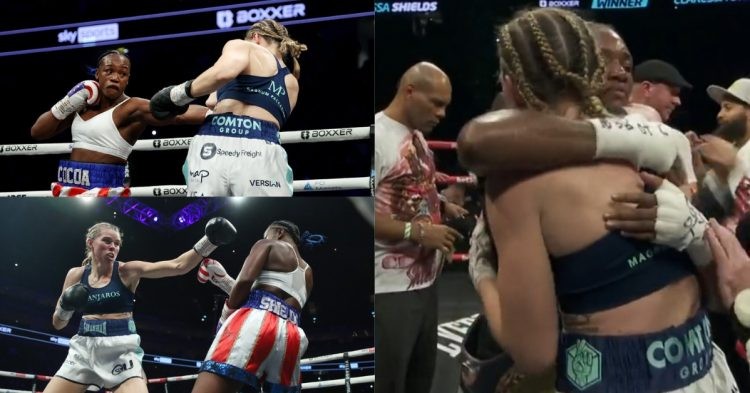 The wait for the highly anticipated main event fight was over as Claressa Shields stepped inside the ring to take on Savannah Marshall in a ten-round bout for the undisputed middleweight title.

This matchup took place at the packed O2 Arena in London, United Kingdom and the atmosphere was electric as these two arch-rivals were in action once again after years of rivalry. It is needless to say that Shields was looking to avenge her amateur loss against Marshall in this rematch.

As expected, the matchup was filled with violence but it was Shields who had the last laugh as she won the fight via unanimous decision.

Both the boxers were very aggressive from the minute go. Savannah Marshall pushed Claressa Shields back and landed some good jabs in the first few rounds of the bout. However, it was the American middleweight who outpunched the British boxer with her great counter-punching ability.

She dominated Marshall with her body shots and combinations and had an upper hand in pretty much the first five rounds of the fight. Although Savannah Marshall found success in the sixth and seventh round as the British boxer did not allow Claressa any space and attacked her body.

The championship rounds of the bout was extremely close with both fighters emptying their gas tank and exchanged some good shots. In the end, both the fighters were not able to find the finish and fight went to the distance.

All three judges scored the bout in favour of Claressa Shields and consequently, she became the new undisputed middleweight champion.

Claressa Shields proved why she is called the GWOAT as she became the first fighter to have won the undisputed titles three times after defeating Savannah Marshall via unanimous decision.

Before the two fighters collided inside the ring, Claressa said in the pre-fight press conference that she will decide whether to give Marshall her respect depending on her behaviour.

Soon after winning the fight, Shields went to congratulate Marshall and the two arch rivals buried their hatchet by hugging it out. Thereafter in the post fight interview, Claressa Shields gave props to the British boxer and her team.

The respect Savannah Marshall has for Claressa Shields after that 👏👏#ShieldsMarshall | @boxxer pic.twitter.com/eJG6z1fa8m

She said that it was undoubtedly the toughest fight of her career and Marshall brought the best out of her. Similarly, Savannah lauded Shields for her performance and gave her the title of the GWOAT. In the end, it was great to see the two fighters giving respect to each other after a hard-fought battle.