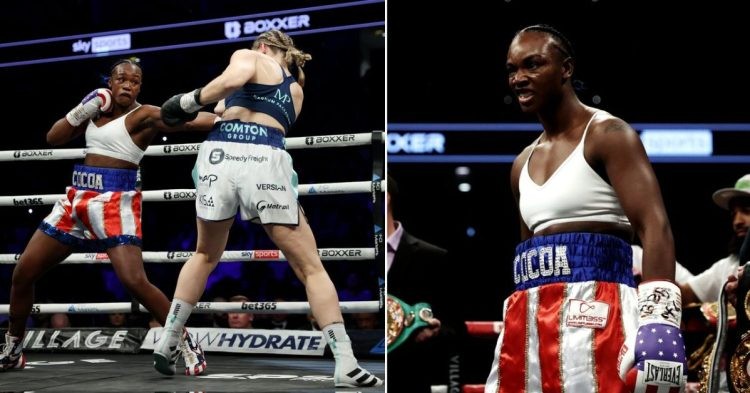 After almost 10 years, Claressa Shields finally got her revenge for the sole loss of her boxing career as she picked up a decisive victory over Savannah Marshall to become the undisputed middleweight champion of the world.

In the process, Claressa Shields became the first women’s boxer in the history of women’s boxing to hold undisputed titles across three weight divisions. No other woman has done it in even two weight classes. A real GWAOT stuff this!

Round 1: Claressa Shields had a slow start to the first round but only for half a minute before a barrage of punches from Shields put Marshall on the backfoot. From the first minute, it was evident we were in for a slugfest. Everything Marshall does, and the British crowd is on its feet.

Round 2: Shields really putting the pedal but Marshall with a big right hand. A huge uppercut from Shields, followed by a right hand. Shields is marching in with power punches. Both the boxers are letting their hands go. “Let her blow out,” says Marshall’s corner.

Round 3: Marshall once again tries to pressure Shields, trying to back the two-time Olympic champion. Shields doing a good job of counter-punching, coming guns blazing at Shields. The hand movement and speed are clearly in the favor of Shields, but Marshall’s power and her grit looked unstoppable here. Not sure if this goes the distance.

Round 4: Claressa Shields connecting at nearly 50% going into the fourth round, starting just where she left off. Marshall has no answer to Shields’ speed, but the British boxer is landing some of her own. The Silent Assassin having more success here, but Shields fires back with an impressive combination. Huge exchange to close the round.

Marshall is clearly looking exhausted in her corner. Power shots connected from Shields, Marshall eats them like it’s nothing.

Round 5: Marshall starts dominant in the fifth round, pushing Shields to the ropes. But a ferocious Shields answers back with combination punches. Great work from Marshall to escape the onslaught, and she lands some of her own. Marshall’s most explosive round this, and the crowd is on its feet every time she lands.

Round 6: Marshall is clearly looking more fatigued than Shields. Marshall has Shields once again backed up on the fence, as both the boxers exchange punches. Some huge punches from Marshall in the corner, bullying Shields back to the ropes and using her size to her advantage. Marshall is talking to Shields, who lands a nice counter left hand.

Marshall might be behind on the scorecards, but there’s no stopping the British boxers who walks right into a big right hand from Shields.

Round 7: Marshall is charging once again, putting Shields on the ropes and trying to land those big shots. Shields fires back, but it seems like Marshall’s ability to keep walking despite eating heavy shots is troubling Shields. A beautiful one-two from Marshall forced Shields into a clinch. Marshall with an uppercut, a good round this for the British boxer. Shields jumps right back and finishes the round with a straight right to the face.

Round 8: Shields starts the round with a one-two combination, but fails to connect. More clinch work in this round and Shields and Marshall are just charging in. Shields is swinging, but Marshall is calculated and once again forces Shields to the ropes. Both the boxers are just bringing the fire, keeping up the work in the clinch, and swinging wildly. What a pace from both of these boxers. Incredible stuff!

Round 9: Two rounds to go and Marshall immediately sets her foot on the medal. A different approach from Marshall in the latter rounds, but Shields was able to come up with her own adjustments. Good left hand to the body from Marshall, who just keeps charging forward as she pushes Shields onto the ring, connecting a huge one-two combination.

Round 10: Final two minutes of a historic bout, and Marshall digging deep here. A good right hand from Marshall, but Shields is able to force a clinch and land some inside shots. A valiant effort from both the boxers, but Shields definitely has the upper hand. Both the boxers end the fight with some heavy exchange and both of them have their hands raised. What a fight!