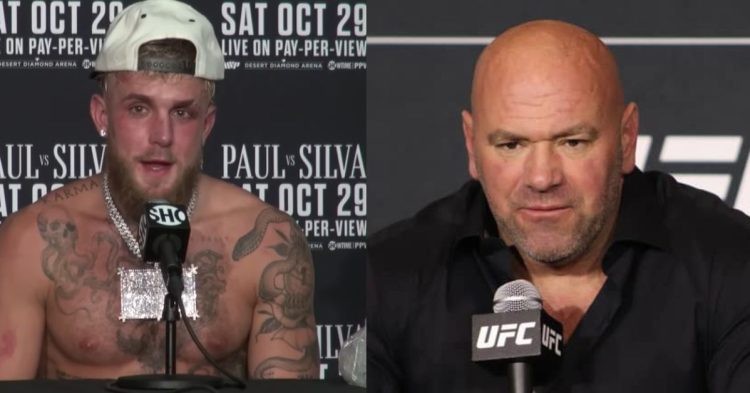 Jake Paul reignites his feud with Dana White after beating Anderson Silva. The UFC president once challenged Paul to fight Silva and guaranteed that the YouTuber-turned-boxer would never call out the UFC legend.

When Paul was calling out fighters who were under the contract of the UFC, White called out Paul, which became a viral clip. In an interview, White said: “I fu***ng guarantee you this, you ain’t gonna see Jake Paul calling Anderson Silva out.” Then hilariously said: “Jake? …Jake? …Jake?”

‘The Problem Child’ then reflected on the challenge that the UFC president had put out. He added: “Bro, you said I wouldn’t do this, and I did it. So, man, Dana White can suck this d*ck.”

Silva and Paul will now come together and create the fighters’ union as they promised. This will help not only UFC fighters but all MMA fighters to get more salary, better healthcare, and post-retirement opportunities.

However, the feud between Paul and White has now gone one step forward. It started with Paul knocking out Ben Askren and then beating Tyron Woodley twice, including a highlight knockout victory in the second fight.

Jake Paul challenges Nate Diaz and calls him “a b**ch”

Jake Paul walked away with the biggest fight of his career. He not only beat Anderson Silva but also knocked him down in the last round. However, Paul was also caught with some sneaky counters from the very creative Silva.

For someone at 47, Silva looked great and his conditioning hardly gave him any issues. Paul outpointed Silva and won by a unanimous decision. However, he barely dominated the fight. In the post-fight interview, Paul addressed his doubters and also called out his next opponent. He said:

“I want Nate Diaz who is a b**ch. He tried to come into my locker room, he tried to cause some sh*t and then he always leaves the f**ing arena. So Nate Diaz, stop being a b**ch and fight me.”

During the event, Nate Diaz was allegedly involved in a backstage brawl with Paul’s team. Before things could escalate, the security team escorted Diaz out of the arena. Paul also called out Alvarez saying:

This victory is a milestone for Paul. However, he has still got more to improve and a fight against Canelo Alvarez would certainly derail Paul’s winning run. Perhaps before fighting an elite boxer like Alvarez, Paul should take his chances against Diaz.