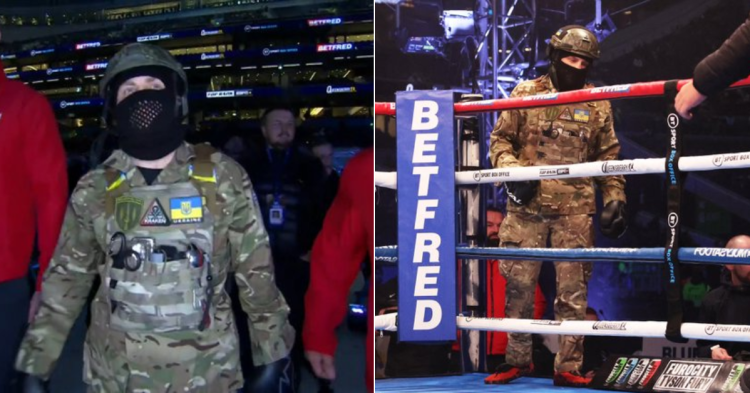 Denys Berinchyk loves a good ring walk! Once again, the Ukrainian fighter stole the show, in an event highlighted by Tyson Fury, who by the way, is notorious for extravagant ring walks. Berinchyk walked to the ring wearing the army kit of the Kraken Batallion, honoring his home country of Ukraine as he went toe-to-toe against Yvan Mendy for the European lightweight title.

Needless to say, the ring walk came in the wake of the ongoing war between Russia and Ukraine. Made up of many Ukrainian Ultras, especially from Metalist Kharkiv & FC Dnipro, Denys Berinchyk was very well received by the boxing fans gathered inside the Tottenham Hotspur Stadium. In the past, he has walked out on a bike, as a caged prisoner, on a horse, and oh! as a teddy bear.

For those that haven’t heard of him, this is Denys Berinchyk. He fights former Luke Campbell conquerer Yvan Mendy on the #FuryChisora show on Saturday.

He’s an Olympic silver medalist from the same team as Loma and Usyk, 16-0 and loves a good ring walk 🤣pic.twitter.com/XWiI3MRwpk

Stepping inside the boxing ring after almost a year, Denys Berinchyk looked quite comfortable albeit more defensive in his unanimous decision win over Yvan Mendy on the undercard of Tyson Fury vs Derek Chisora 3.

Who is Denys Berinchyk, Ukrainian boxer knowns for his unique ring walks?

The 34-year Ukrainian is a former Olympic silver medalist. At the time, he competed in the light-welterweight division. He is also a former silver medalist in world championships.

Denys Berinchyk is from the same team that boasts the likes of Oleksandr Usyk and Vasyl Lomachenko. He is a Ph.D. holder in physical education and sports and has also competed in a bare-knuckle fight. Surprisingly enough, his opponent was the former training partner of Conor McGregor, Artem Lobov.

Denys made his professional boxing debut in 2015, three years after his Olympic win in London. He is currently 17-0 in his pro-boxing career with 9 stoppage wins to his name and has the European lightweight title and WBO International lightweight title on his shoulders.