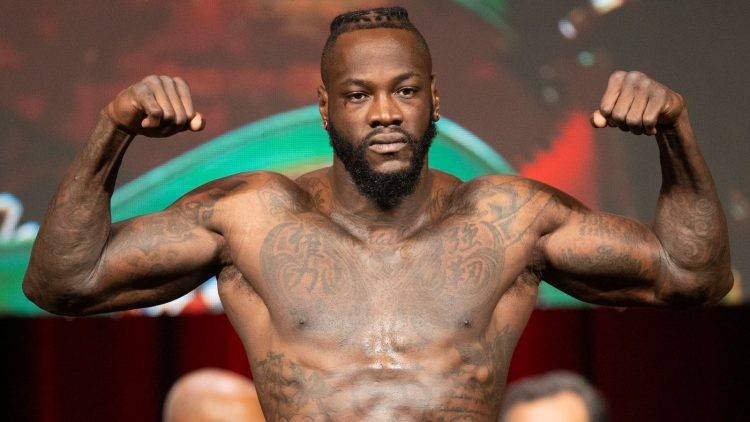 Two weeks have passed since the Tyson Fury vs Deontay Wilder 3 press conference took place. It was one of the weirdest boxing events as the two heavyweights engaged in a 5-minute long bizarre stare-down. In addition to that, Wilder chose to ignore all the questions from the interviewer during the press conference.

But Tyson Fury was very confident as he made some bold statements during the press conference. The Gypsy King had predicted that he would run over Deontay Wilder like an 18 wheeler in their trilogy fight. However, The Bronzebomber did not respond to any comments made by Tyson Fury

Although the American has finally responded to those claims by giving a warning to the British fighter on social media. Deontay Wilder posted a video on his Instagram handle captioned  “You say you’re a semi-truck, I’m going to run over like a train.” He also advised Fury “Better get your Weight up”

Deontay Wilder looks in top shape for this fight as he bench-pressed a 310 lb weight during his training session. He is very determined to take the title back from Tyson Fury. As a result, Wilder will be looking for vengeance when the two fighters face off on 24th July for the third time.

Also read: Boxing Purse: How Much Did Deontay Wilder and Tyson Fury Earn for Their Epic Rematch in 2020

What changes does Deontay Wilder have to make to defeat Tyson Fury?

There is no doubt that Deontay Wilder is the most dangerous heavyweight fighter present in the entire world. His record speaks for itself as The Bronzebomber has 41 knockouts out of 44 fights. But the only fighter who has managed to survive Wilder’s wrath is his formidable rival Tyson Fury.

The Gypsy King has managed to nullify Wilder’s knockout power by his flawless defensive technique in their last two meetings. However, Deontay Wilder will look to break his defense when they face off in their trilogy fight. The Bronzebomber will have to make certain changes in his technique if he wants to defeat Tyson Fury. Wilder has to make improvements in his defensive side of the game because he was unable to avoid Fury’s attack in the entire fight. Another change that Wilder needs to make is that he has to be the aggressor and put the champion under pressure during their trilogy fight. This is because he was pushed in the backfoot by Fury in their rematch. As a result, he took a lot of damage and was injured in the match later.

In the end, it won’t be so easy for Deontay Wilder to defeat Tyson Fury because even though he will make changes for the trilogy fight, Fury will be ready for everything that comes his way. The Gypsy King is an elite boxer who is wary of the threat that The Bronzebomber possesses. Therefore the third fight will be an epic battle between the two Heavyweight rivals.