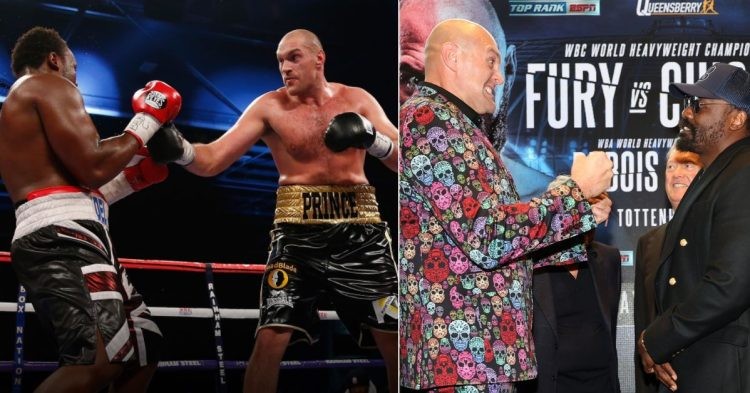 Tyson Fury will come out of retirement to take on Derek Chisora in a trilogy fight on 3 December inside Tottenham Hotspur Stadium in London. The bout will mark the third time that both these British greats will share the boxing ring. Fury has beaten Chisora the last two times they have faced each other.

Needless to say, it’s a huge event, marking the return of Tyson Fury to the boxing ring after seemingly announcing retirement from the sport earlier this year following a stoppage win over Dillian Whyte. Meanwhile, Chisora will make his return to the ring in the back of a split decision win over Kubrat Pulev.

The anticipation for the fight can be understood from the fact that over 50,000 tickets were sold on the first day for the huge showdown inside Tottenham Hotspur Stadium. Needless to say, it’s arguably the biggest fight of Chisora’s career who is nearing retirement.

How much will Derek Chisora earn for the trilogy fight against Tyson Fury?

There are no official numbers regarding how much each boxer will earn for the trilogy fight in London on 3 Decemeber. However, the Gypsy King accidentally let slip how much Chisora will make for the showdown during the press conference.

The heavyweights are back on December 3rd. @RPrograis is on this weekend in a number 1 v 2 fight again too. Good luck to him 😂😅👏 #tbt #warchisora pic.twitter.com/ILEUkf760D

According to Tyson Fury, Derek Chisora will make £2 million for the trilogy fight in December. The purse will mark one of the highest in Chisora’s career. There’s no clarity on whether or not he will have a share of the PPV revenue.

“Listen, you should let me manage you, I’m the man who has got you this two million quid, me, not AJ [Joshua] and I’ll do it for free. I won’t take a tenner off of you, because I like to help people out for nothing. Free of charge, for old time’s sake, let me manage you.” Fury said.

Tyson Fury has revealed the true reason why he accepted to fight Derek Chisora. The Gypsy King revealed that he paying back Chisora for fighting him early in his career and is only fulfilling his promise to him. Moreoever, he also added that he wanted to be the first boxer to be involved in two trilogies. Fury has already faced Deontay Wilder thrice in his boxing career.