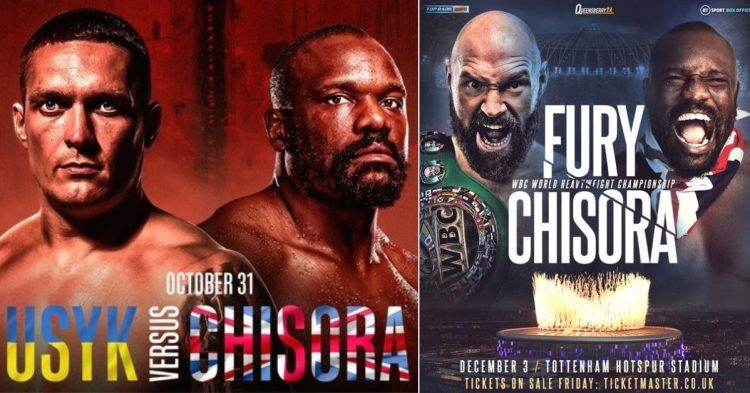 Derek Chisora will make his boxing return against Tyson Fury in a trilogy fight on 3 December in London. Coming off a hard-fought split decision win over Kubrat Pulev, Chisora, 38, will look to create history as he takes on the Gypsy King. This will be the third encounter between both these heavyweight stalwarts

Ahead of the fight, we took a look at how much Derek Chisora will earn for the trilogy fight against Tyson Fury and the numbers look pale in comparison to Chisora‘s fight purse against Oleksandr Usyk.

It won’t be wrong to say that on paper, Tyson Fury vs Derek Chisora is a much bigger fight. While Oleksandr Usyk reigns as the unified heavyweight champion of the world, that wasn’t the case when Chisora faced him inside the ring. On the contrary, it was Usyk’s second fight in the heavyweight division after moving up from cruiserweight.

Regardless, it’s safe to say Tyson Fury is a more popular name in boxing than Oleksandr Usyk. However, Derek Chisora’s fight purses for both the fights beg to differ.

Derek Chisora earned a whopping £4.4 million for his fight against Oleksandr Usyk back in October 2020. More than two years later, Chisora takes on Tyson Fury for the third time in his boxing career; a bout that will also mark the return of Gypsy King after calling retirement earlier in April 2022.

While the exact figures are not known, according to Fury himself, Chisora will take home £2 million for the much-anticipated trilogy fight in London on 3 Decemeber.

The fight purse against Oleksandr Usyk marks the biggest fight purse of Derek Chisora’s career. Initially, Chisora was guaranteed to make in the excess of £6 million for the fight. However, due to the pandemic and amidst no-crowd, the gate receipt deficit meant the fight purse was readjusted.

Needless to say, these are surprising figures considering how big a name is Tyson Fury. Moreoever, coming back from retirement, one would have hoped Chisora to make a little more than what he is being paid right now.

Surprisingly, the amount is even less than what Chisora made for the Joseph Parker fight. The rematch between Parker and Chisora saw the British boxer tape his mouth during the press conference, demanding better pay from Eddie Hearn.