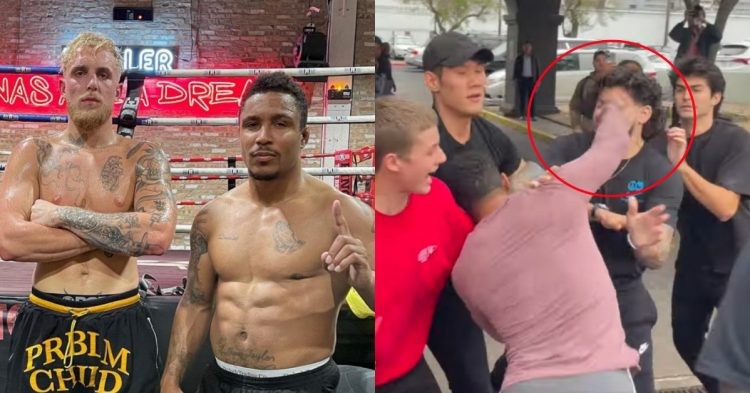 Dillon Danis just can not seem to stay away from causing trouble! He currently has an MMA record of 2-0 and has not competed in the sport since beating Max Humphrey in June 2019. But his inactivity in the cage did not stop him from creating headlines outside of it. In a recently released video, Danis was seen brawling with former MMA fighter Anthony Taylor.

During a recent Misfits Boxing event, Dillon went at it with famous British YouTuber KSI. Although Dillon escaped the incident without much of an altercation, what followed afterward was much more violent. Anthony Taylor was also present at the event during the scuffle. As Dillon was leaving the scene, Taylor followed him outside and started shouting at him.

Needless to say, it caught Danis’ attention who did not seem too interested in engaging with Anthony. However, Jake Paul‘s sparring partner kept pushing and asked Danis to fight him. Both Danis and Taylor have competed in Bellator. He then lunged forward and landed a big punch which definitely rocked Danis. Dillon, who is friends with Conor McGregor, then retaliated which sparked a brawl.

However, the scuffle did not last long as they were quickly separated. The punch left Danis red-faced. iFL TV caught the entire incident and the 29-year-old stated that he thought Taylor was “a homeless guy on the street.” He was then escorted away from the scene.

But the incident that started the whole fiasco, took place moments before the confrontation between Anthony Taylor and Dillon Danis. During the above-mentioned Misfits Boxing event, Danis walked upto KSI and asked him to sign the contract to fight him. Dillon also stated that KSI looked much smaller in person. However, the YouTuber turned boxer stated that he can KO Danis at will.

However, Dillon then dared KSI to back up his words and threw a cup of coffee that he had in his hand. The situation had the potential to turn very ugly. But the security personnel, present at the event, took charge of the situation and separated the two. But, it ultimately resulted in the brawl between Anthony Taylor and Dillon Danis outside the venue.

KSI later took to Twitter and issued a warning to Danis. He also called the BJJ maestro a “b*ch.”

I’m the wrong guy to fuck with @dillondanis

You a whole bitch @dillondanis

The 29-year-old British fighter last competed in August this year and beat two opponents in a night. Hence, fans are excited to see what he does next. There were talks that he may fight Tyron Woodley next. However, KSI seems to have lost interest in the match-up. But the recent confrontation between him and Dillon Danis may result in a fight in near future.

This is not the only occasion when Danis was involved in a street fight. Recently Nate Diaz also attacked Danis outside Madison Square Garden after the culmination of UFC 281.