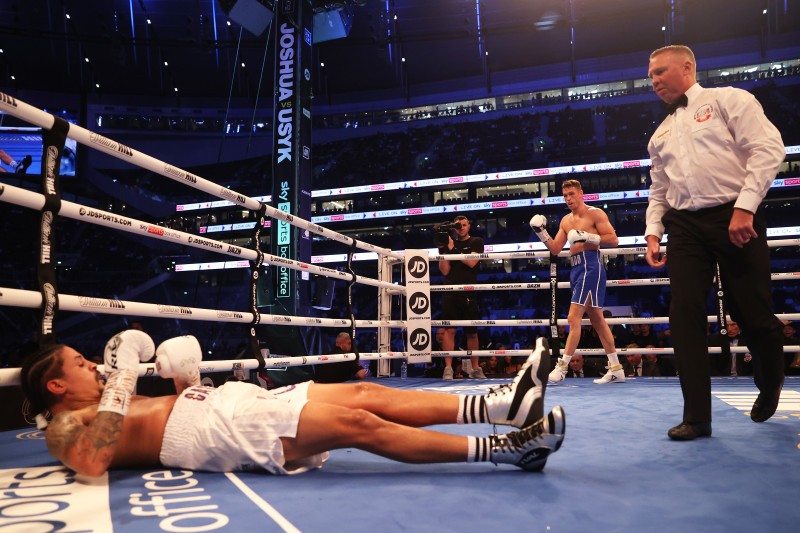 In one of the biggest boxing PPVs of this year, Callum Smith made his light heavyweight debut against Lenin Castillo.

This was the comeback fight for the former super middleweight world champion, Callum Smith after getting outclassed by Canelo Alvarez in his last fight.

Following his first pro boxing loss, Callum Smith was aiming to make a statement in the undercard of Anthony Joshua vs Oleksander Usyk. And he certainly shocked the boxing world with a devastating knockout over Lenin Castillo.

In the second round of the fight, Smith dropped Castillo and the fight was stopped immediately was Castillo could not even respond to the referee.

The fans in the arena, Callum Smith, and the ringside personals were concerned for Castillo’s health as he was unresponsive for a long time. He was taken away from the arena on a stretcher.

Fortunately, Lenin Castillo is responsive and under medical examination as precautionary measures. Eddie Hearn gave the medical update on Castillo and stated:

“A horrible brutal knockout. Castillo is responsive and on his way to the hospital”.

With this win, Callum Smith has now 28 wins in his pro boxing career with 20 KOs. But, the knockout win over Lenin Smith is certainly one of the best knockouts of his career so far.

The undercard of Anthony Joshua vs Oleksander Usyk has been exciting. In the co-main event, Campell Hatton secured a controversial decision win over Sonnie Martinez. Florian Marky defeated Maxim Prodan via a split decision.

Who is Nicole Osbourne? – Ex-Girlfriend of Anthony Joshua